Gano Excel USA, Inc. (“Gano” or the “Company”) is a direct selling company that was founded in 2002 and that sells comfort beverages and personal care products. Gano is a global company with affiliates in more than 65 countries and is headquartered in Chino, California.

The Direct Selling Self-Regulatory Council (“DSSRC”) is a national advertising self-regulation program administered by BBB National Programs, Inc. This inquiry was commenced by DSSRC pursuant to its ongoing independent monitoring of advertising and marketing claims in the direct selling industry.

The representative product and earnings claims that formed the basis of this inquiry were disseminated by Company salesforce members on various social media platforms.  Those claims are set forth below: 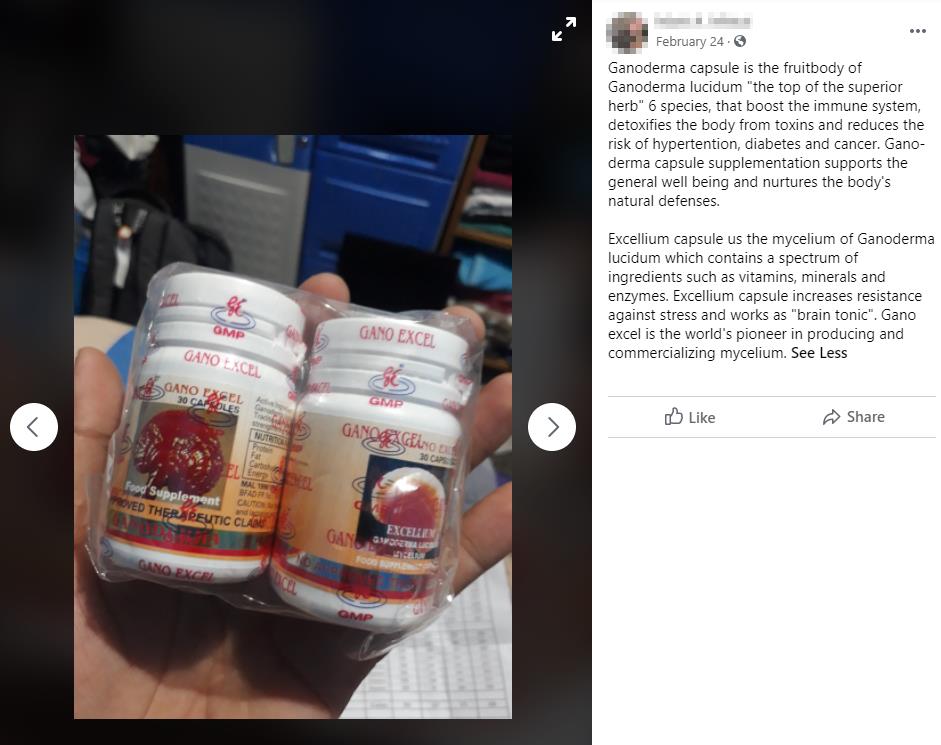 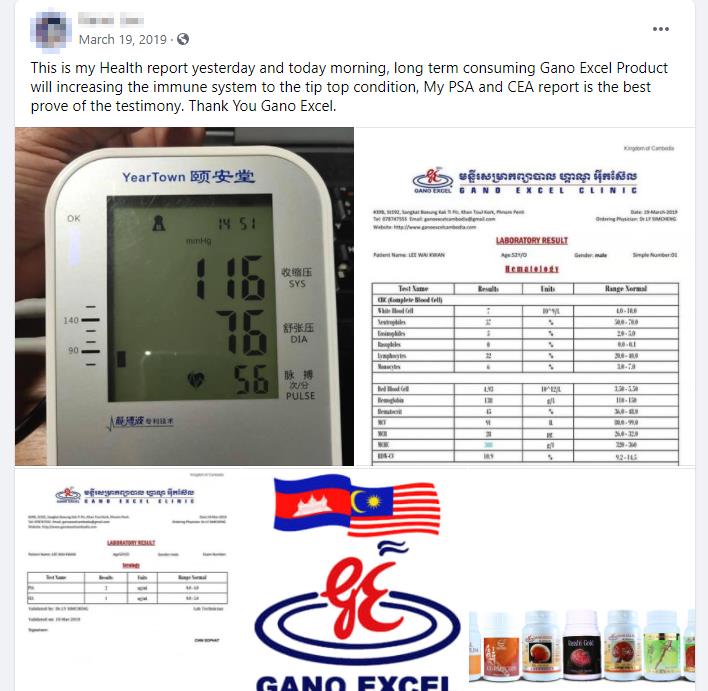 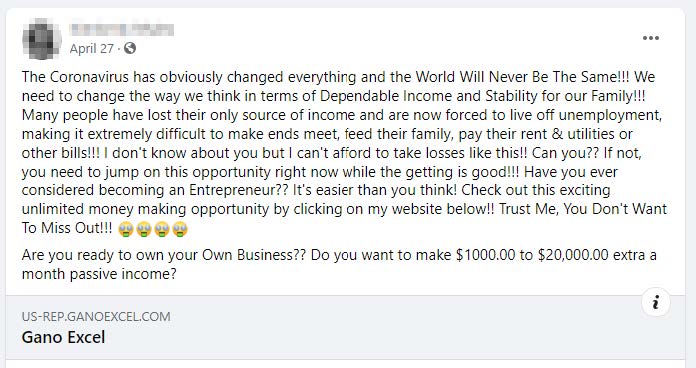 Gano did not dispute that the claims in the social media posts identified by DSSRC should not have been disseminated. In its review of the posts, Gano indicated that the claims were communicated by the Company’s independent contractors, many of whom were located overseas, and assured DSSRC that the posts would be removed. More specifically, Gano informed DSSRC that it contacted the independent contractors responsible for the posts in question and that “most have been taken down.” Gano added that it drafted termination letters for those salesforce members that did not adhere to the Company’s request that the claims be taken down.

Gano stated that compliance with Federal Trade Commission (FTC) and Food and Drug Administration (FDA) rules and regulations rules has always been of paramount importance to the Company and that when salesforce members enroll as a Gano affiliate, they agree to abide by the Company’s Policy and Procedures which prohibit any unauthorized representations regarding the potential income that salesforce members will earn and the ability of Gano products to treat any specific health-related conditions.

DSSRC determined that the product performance claims that were identified in this inquiry imply that the use of Gano products can treat or prevent a number of serious health-related conditions including cancer, diabetes, hypertension, allergies, herpes, asthma, arthritis, obesity and Alzheimer’s disease. In addition, several of the social media posts at issue suggest that Gano products are effective to prevent and treat coronavirus.

It is a fundamental principle of advertising law that an advertiser has the burden to possess a reasonable basis for any substantive claims communicated by its advertising and that all health-related claims must be supported by competent and reliable scientific evidence.[2] In addition, an advertiser has an obligation to support any express or implied claims that may be reasonably interpreted by consumers.[3]

Moreover, while the FDA has granted emergency use authorizations for some medicines to be used for certain patients when hospitalized with COVID-19 disease, at this time there are no non-medicinal products that have been approved by the FDA to  prevent or treat COVID-19.

When a direct selling company is made aware of improper product (or income) claims that were made by an individual that was not within its geographical control or who was an active distributor when such claim was made but that has since become an inactive distributor of the company, DSSRC acknowledges that the direct selling company may not be able to require such salesforce members to remove a social media post. In that instance, DSSRC nonetheless recommends that the direct selling company make a bona fide good faith effort to have the improper claim removed. Here, despite several requests by DSSRC,  Gano did not provide information indicating if the salesforce members responsible for the posts were active or inactive sales members and did not provide copies of take-down requests and/or termination letters to such salesforce members as a demonstration of the Company’s due diligence and good faith efforts to address DSSRC’s concerns and remove the problematic claims from circulation.

In addition, in past inquiries DSSRC recommended that if the social media platform where the subject post was made provides a mechanism for reporting trademark or copyright violations, the direct selling company should promptly utilize such mechanism and seek removal of the subject claims and posts if appropriate. If the subject claim that came to the attention of the direct selling company occurred on a website or platform without a reporting mechanism, DSSRC has recommended that in addition to contacting the former salesforce member in writing as described above, the Company contact the website or platform in writing and request removal of the subject claim or post.[5]

Here, despite the Company’s representation that it contacted its salesforce members asking that the improper posts be removed, DSSRC did not receive written confirmation of such requests and, as such, could not confirm the Company’s due diligence and good faith efforts to address DSSRC’s concerns.

The subject inquiry included four social media posts that communicated unqualified earning claims which referenced either replacement income, free money or potential income of up to $20,000 and $50,000 a month.[6] As of the date of this decision, all four of the posts are remain active. Gano did not attempt to support the truth and accuracy of any of the posts and indicated to DSSRC that it was in the process of contacting the salesforce members who disseminated these posts to request that they be removed. Notwithstanding this representation, all of the posts remain active.

Here, Gano conceded that the amount of income promised in the social media posts disseminated by Company salesforce members was excessive and not representative of the amount of earnings that could be typically expected by potential Gano salesforce members. As such, DSSRC remains extremely concerned that the posts at issue remain active and readily accessible by consumers. As explained in the above section addressing Gano’s product performance claims, it is incumbent on the Company that it demonstrate that it has made a good faith effort to contact the salesforce members responsible for the posts to have them taken down. As also noted by DSSRC in the above section of this decision, the mere statement that the Company has attempted to contact the salesforce member responsible for the claims and asked that the post be removed, by itself, does not demonstrate the good faith effort necessitated to enforce strict compliance oversight over egregious unsupported earnings claims such as the ones now before DSSRC.

As such, DSSRC recommends that Gano either have the social media posts making the unsupported earnings claims immediately removed or that it demonstrate to DSSRC that it has used its best efforts to contact the salesforce members responsible for the posts and demand that they be taken down and, if necessary, contact the platform on which the claims were made to report any trademark or copyright violations and otherwise request removal of the claims.

DSSRC recognized that Gano removed five of the 17 posts that DSSRC brought to the Company’s attention during this inquiry. Notwithstanding, in light of the egregious and unsupported product performance and earnings claims that continue to proliferate on social media, DSSRC recommends that Gano take all necessary steps to contact the salesforce members who disseminated the posts and request that they be removed. Further, should the Company be unable to contact these salesforce members, it should demonstrate to DSSRC that it has exercised the necessary due diligence and good faith efforts to contact the salesforce members responsible for the posts and request that they be taken down and, if not, to contact the platform on which the claims were disseminated as described above in the Analysis and Recommendation section of this decision. DSSRC will continue to monitor the status of the posts and initiate a compliance inquiry should it be determined that the Company failed to demonstrate that it has made a bona-fide, good faith effort to address DSSRC’s concerns.

[1] During the pendency of this inquiry, DSSRC identified additional social media posts disseminated by salesforce members that communicated claims that Gano products can treat specific health-related conditions. DSSRC alerted the Company of these additional posts shortly after the inquiry was commenced.

[4] This includes posts that were identified by DSSRC after the inquiry was commenced.

[6] During the pendency of the inquiry, DSSRC identified an additional social media post claiming that salesforce members can make between $500-$50,000 a month.