Aihu, Inc, (Aihu or the “Company”) is a direct selling company located in Boise, Idaho that was founded in 2002. The Company offers biodegradable, organic, essential oil skincare products.

The Direct Selling Self-Regulatory Council (DSSRC) is a national advertising self-regulation program administered by BBB National Programs. This inquiry was commenced by DSSRC pursuant to its ongoing independent monitoring of advertising and marketing claims in the direct selling industry.

DSSRC identified the following representative product performance claims disseminated on the Company website and by independent salesforce members on social media. DSSRC was concerned that the representative claims below communicate that Aihu products can protect against serious health-related conditions: 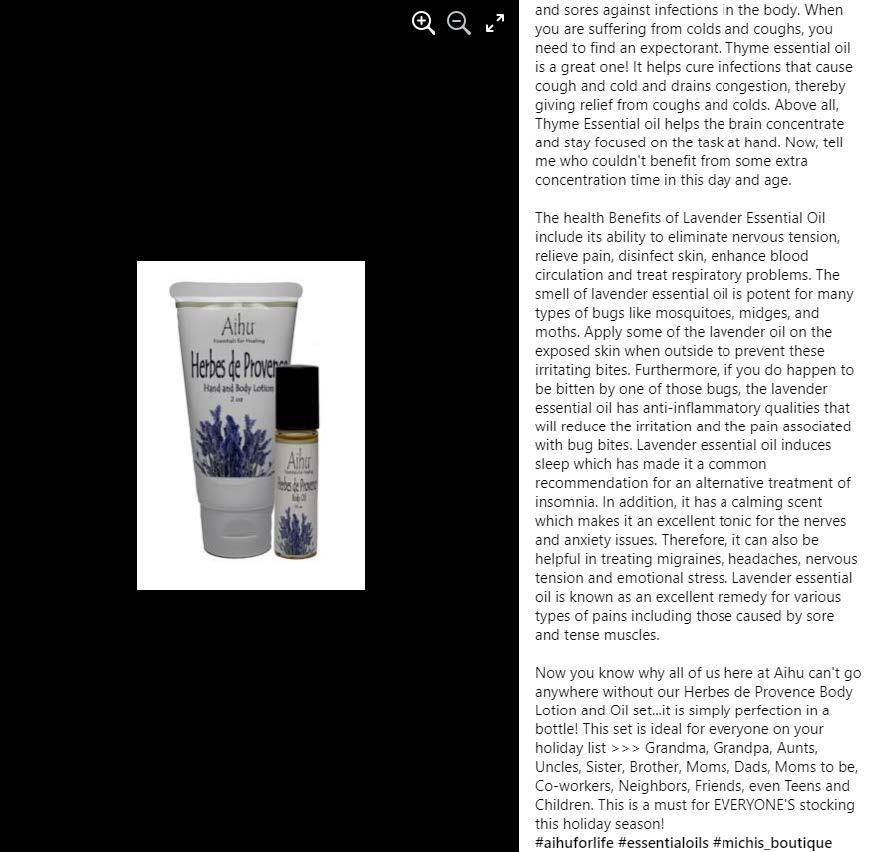 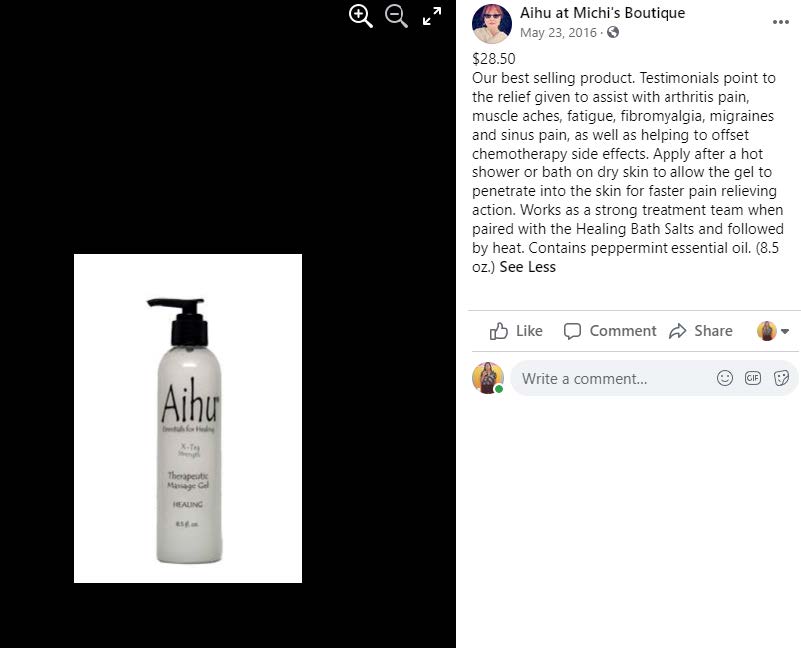 Following its receipt of the DSSRC inquiry, Aihu immediately contacted DSSRC to discuss its compliance process and the monitoring of product claims communicated by its sales force members.

The Company explained that it engages with its salesforce on a quarterly basis to reinforce the importance of communicating truthful product claims to consumers. More specifically, Aihu advises its sales force that they cannot report specific product claims on social media including claims that Aihu products can relieve, heal, or cure health-related conditions as these are not results that can be generally expected and that such claims are not supported by competent and reliable test evidence.

Regarding the claims at issue, Aihu advised DSSRC that the posts identified in the inquiry had all been disabled. In addition, the Company stated that it removed the testimonials on its website that were brought to its attention by DSSRC and added a disclosure to the testimonial page stating that the testimonials reflect real-life experiences of individuals who used Aihu products but that individual results may vary and consumers should not understand the testimonials to mean that any individual experience recounted is typical or representative of what any other consumer might experience.

Aihu also informed DSSRC that as a result of the inquiry, the Company would increase its monitoring oversight of sales force members and ensure that all posts are compliant with Company policy and all relevant state and federal regulations.

DSSRC expressed its appreciation to Aihu for its commitment to voluntary advertising self-regulation and for its ongoing reinforcement to salesforce members of the appropriate dissemination of product claims.

Although the Company indicated to DSSRC that it “removed all active posts identified by DSSRC,” DSSRC noted that only one of three social media posts that were brought to the Company’s attention had been taken down. DSSRC also requested that the Company provide a copy of the takedown requests that were sent to the sales force members responsible for the active posts. However, Aihu did not provide such documentation to DSSRC.

The first remaining post states that “Testimonials point to the relief given to assist with arthritis pain, muscle aches, fatigue, fibromyalgia, migraines, and sinus pain, as well as helping to offset chemotherapy side effects.”

More specifically, with respect to the Aihu’s Basil Essential Oil product, the second post states that basil treats “nausea, motion sickness, indigestion, constipation, and respiratory problems” as well as “nervous tension or mental fatigue.” The post goes on to state that this ingredient provides “mental strength and clarity” and that the product used in the treatment of arthritis, wounds, injuries, burns, bruises, scars, sports injuries, surgical recovery, sprains, and headaches.”

The same post discusses the benefit of Aihu’s Thyme Essential Oil stating that the thyme ingredient “stimulates circulation to relieve joint pain associated with arthritis or gout.”  In referencing coughs and colds, the posts states that the product “helps cure infections that cause cough and cold and drains congestion, thereby giving relief from coughs and colds.”

With respect to the first social media post at issue, DSSRC determined that one reasonable consumer take-away is that the statements of product efficacy have been proven based upon the positive reports from users of the product. However, positive statements from other product users is considered anecdotal and cannot be relied on as a substitute for the type of competent and reliable evidence needed here to support the health-related claims communicated by the Aihu sales force member. [1]

As has been noted in previous self-regulatory cases, testimonials cannot replace actual evidence as support for advertising claims, notwithstanding that they may reflect the honest opinions of satisfied users. Moreover, an advertiser may not make claims through consumer testimonials that could not be substantiated if made independently by the advertiser and that anecdotal evidence, based solely on the experiences of individual consumers, is insufficient to support product efficacy claims. [2]

Aihu did not contest DSSRC’s position that the health claims communicated by the post were inaccurate and did not attempt to substantiate the statements with independent testing data. Accordingly, DSSRC recommended that the Company disable the post.

Turning its attention to the second post, although the efficacy claims communicated by the sales force member were attributable to the ingredients contained in the Aihu products and not the product itself, DSSRC determined that a reasonable consumer take-away from the claims is that the product could provide the stated benefits based upon the presence of those ingredients in the product.[3] However, the Company did not provide any evidence that the ingredients as contained in Aihu products could deliver the results stated by the Company sales force member. In the absence of such evidence, DSSRC recommended that the post be removed.

Again, the Company did not dispute DSSRC’s concerns that the health-related statements in the two remaining social media posts were inappropriate and Aihu did not attempt to substantiate the claims with evidentiary data.

DSSRC identified several consumer testimonials on the Company website (www.aihu.net) which referenced the ability of Aihu’s products to relieve or eliminate several health-related conditions including allergies and arthritis.

It is well-established that claims concerning the efficacy of health products should be supported by competent and reliable scientific evidence.[4] The Federal Trade Commission (FTC) generally defines competent and reliable scientific evidence as: “test, analyses, research, studies, or other evidence-based on the expertise of professionals in the relevant area that has been conducted and evaluated in an objective manner by persons qualified to do so, using procedures generally accepted in the profession to yield accurate and reliable results.”

The fact that the health-related claims were communicated by consumers and not the advertiser itself does not absolve an advertiser of its responsibility to provide the necessary support for claims of product efficacy. Section 255 (2)(b) of the FTC’s Guide on the Use of Endorsements and Testimonials in Advertising (the “FTC Guides”) states that “[a]n advertisement containing an endorsement relating the experience of one or more consumers on a central or key attribute of the product or service also will likely be interpreted as representing that the endorser’s experience is representative of what consumers will generally achieve with the advertised product or service in actual, albeit variable, conditions of use. Therefore, an advertiser should possess and rely upon adequate substantiation for this representation. If the advertiser does not have substantiation that the endorser’s experience is representative of what consumers will generally achieve, the advertisement should clearly and conspicuously disclose the generally expected performance in the depicted circumstances, and the advertiser must possess and rely on adequate substantiation for that representation.

In addition, DSSRC determined that the inclusion of a disclosure at the bottom of the Testimonial page of the Aihu website stating that the testimonials reflect real-life experiences of individuals who used Aihu products and that individual results may vary would not significantly change the way that consumers interpret the health-related claims. As noted in the first footnote of the FTC Guides:

“The Commission tested the communication of advertisements containing testimonials that clearly and prominently disclosed either “Results not typical” or the stronger “These testimonials are based on the experiences of a few people and you are not likely to have similar results.” Neither disclosure adequately reduced the communication that the experiences depicted are generally representative. Based upon this research, the Commission believes that similar disclaimers regarding the limited applicability of an endorser’s experience to what consumers may generally expect to achieve are unlikely to be effective.”

Aihu removed the two consumer testimonials identified by DSSRC in this inquiry, an action that DSSRC deemed necessary and appropriate based upon the omission of evidentiary data in the case record that would support such claims.

DSSRC recognized the voluntary actions taken by Aihu to address its concerns and further recommended that the Company conduct a comprehensive review of the other testimonials posted on its website to assure that the testimonial webpage does not include other statements from consumers that could be reasonably interpreted by consumers as communicating health-related product performance results from using Aihu products.

In addition, Aihu removed the two consumer testimonials identified by DSSRC which communicated unsupported product performance claims. an action that DSSRC deemed necessary and appropriate based upon the omission of evidentiary data in the case record that would support such claims.

“Aihu Inc accepts DSSRC's decision in its entirety and agrees to adhere to its recommendations.”