The Direct Selling Self-Regulatory Council (“DSSRC”) is a national advertising self-regulation program administered by BBB National Programs. This inquiry was commenced by DSSRC pursuant to its ongoing independent monitoring of advertising and marketing claims in the direct selling industry.

This inquiry concerns earnings claims disseminated by the Company and its salesforce members. The representative claims that formed the basis of this inquiry were disseminated on Facebook and YouTube: 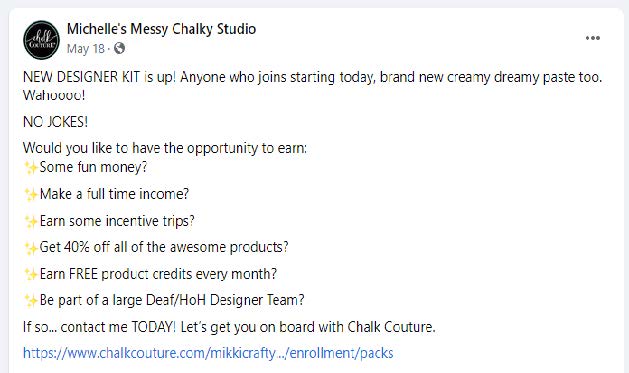 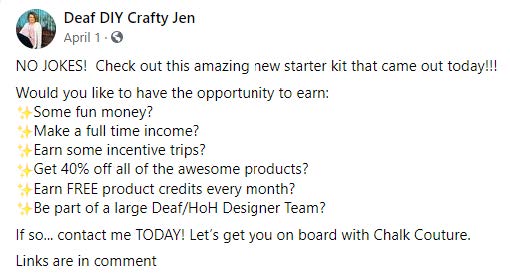 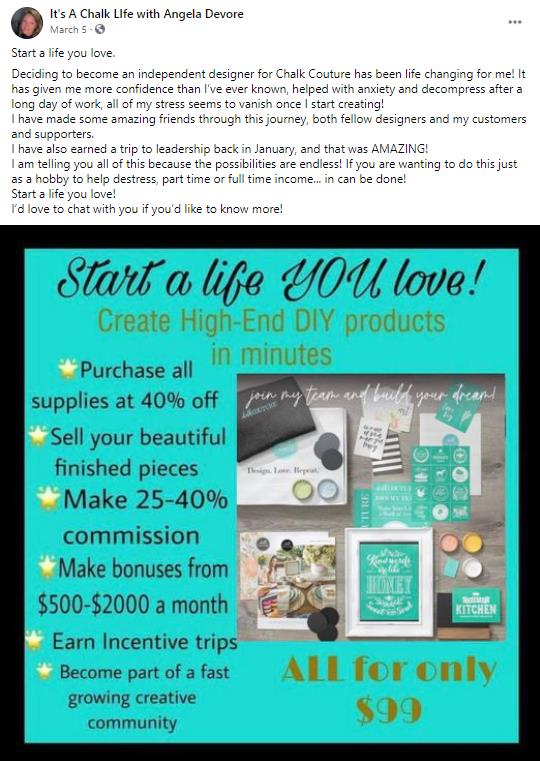 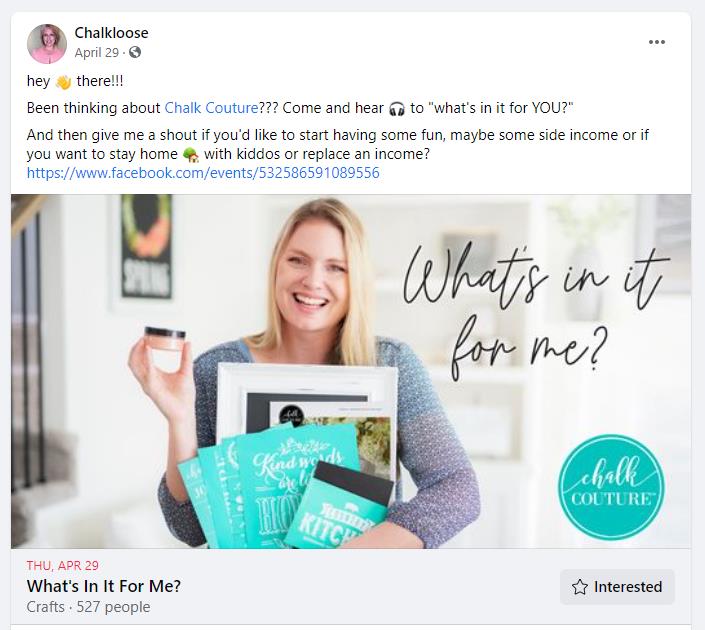 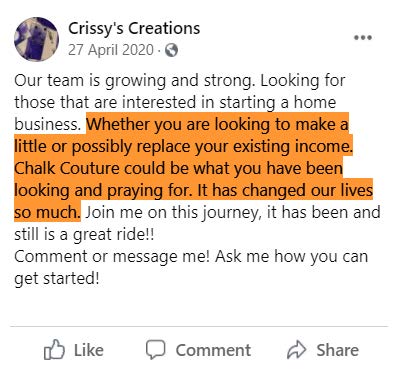 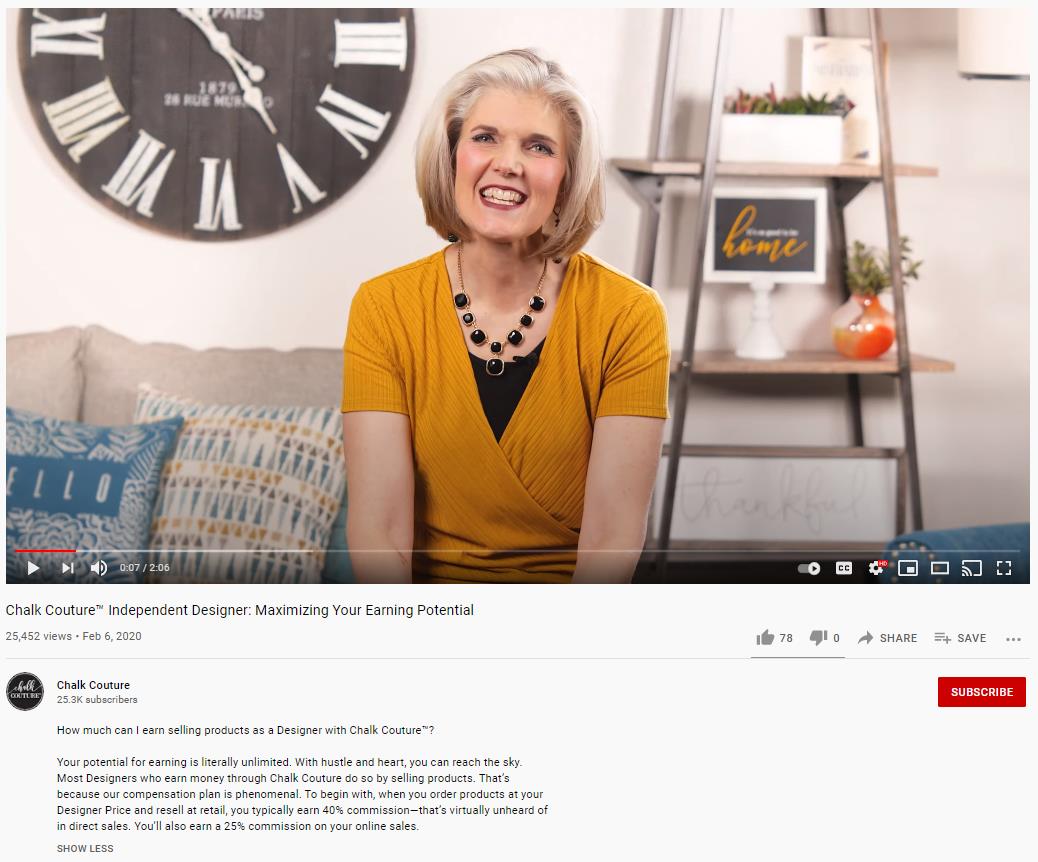 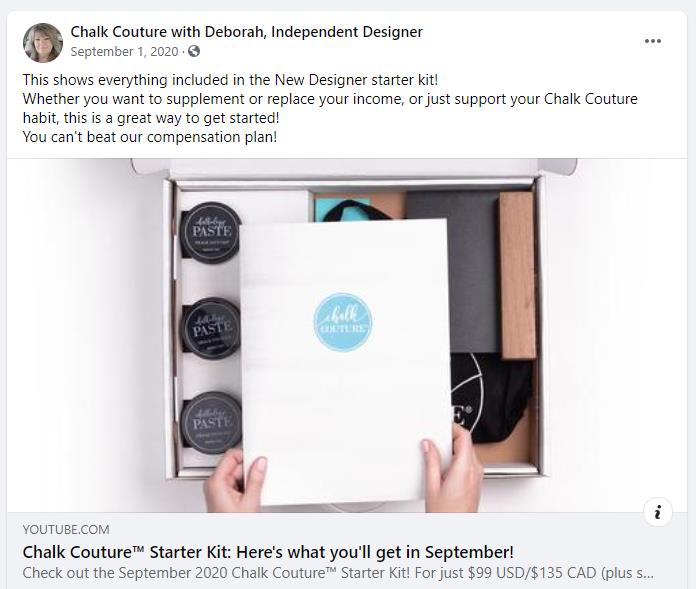 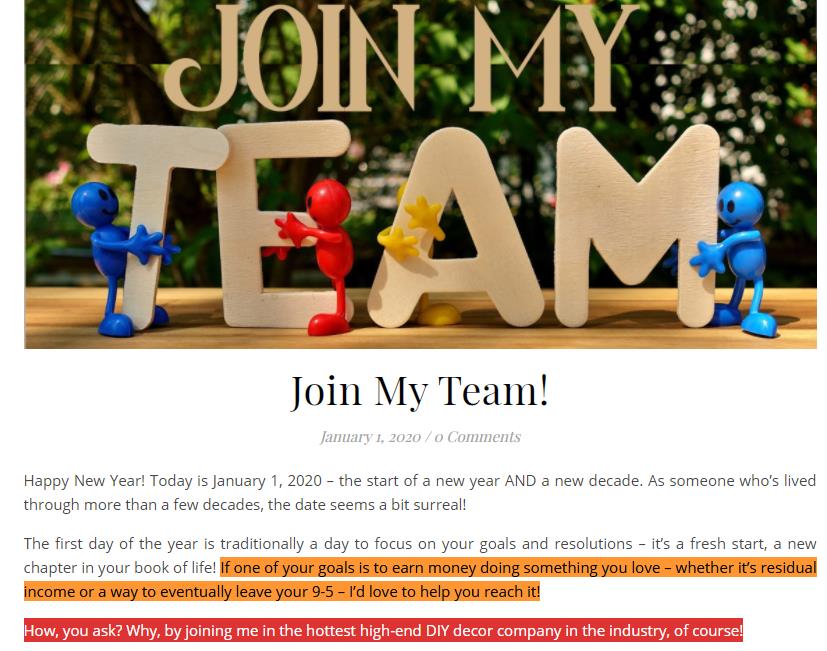 DSSRC informed the Company of its concern that such earnings claims may convey an unsupported message regarding the amount of income that can be typically earned through the Chalk Couture business opportunity.

Chalk Couture maintained that the claims DSSRC brought to its attention should be removed from circulation. The Company was responsive to DSSRC’s inquiry and took prompt steps to address the claims at issue. The Company contacted the salesforce members that disseminated the six Facebook posts at issue. The Company was able to have three of the Facebook posts taken down. The Company was also able to have two additional posts modified to remove references to “Make a full time income?” and “if you want to stay home [] with kiddos or replace an income.” One remaining Facebook post remains active and unmodified. The Company informed DSSRC that the post was disseminated by someone who is no longer affiliated with the Company. The Company informed DSSRC that it tried to contact the former salesforce member responsible for the remaining post multiple times but that person was not responsive to the Company’s efforts. The Company also contacted Facebook to request removal of the post.

With respect to the YouTube video at issue as well as a link to the video, the Company informed DSSRC that the link is no longer live and that the video cannot be found on Chalk Couture’s YouTube channel.

In addition to its efforts to address the specific social media posts identified by DSSRC, Chalk Couture also advised DSSRC that it has taken and will take additional steps in the future to educate salesforce members on making marketing and earnings claims. Such steps include:

As to the remaining Facebook post made by a former salesforce member, DSSRC acknowledged the Company’s efforts to contact the former salesforce member and request removal of the post. When a direct selling company such as Chalk Couture is made aware of an improper product or income claim that was made by an individual that was an active distributor when such claim was made but that has since become an inactive distributor of the company, DSSRC acknowledges that the direct selling company may not be able to require the former distributor to remove such claim.[2] In that instance, DSSRC nonetheless recommends that the direct selling company make a bona fide good faith effort to have the improper claim removed. DSSRC determined that actions similar to Chalk Couture attempting to contact the former salesforce member in writing requesting the removal of the post would constitute a bona fide good faith attempt with respect to removing improper claims made by distributors that have since become inactive distributors. If the social media platform where the subject post was made provides a mechanism for reporting trademark or copyright violations, DSSRC recommends that the direct selling company promptly utilize such mechanism and seek removal of the subject claims and posts. If the subject claim that came to the attention of the direct selling company occurred on a website or platform without a reporting mechanism, DSSRC recommends that in addition to contacting the former distributor in writing as described above, the Company contact the website or platform in writing and request removal of the subject claim or post. Accordingly, DSSRC determined that the Company’s request to Facebook to remove the post was necessary and appropriate.

With respect to the YouTube video at issue, while DSSRC appreciated the Company’s good faith efforts to remove the YouTube video from the public domain by listing it as “private,” DSSRC remained concerned that the video may nevertheless be re-purposed to a select group of potential downline salesforce members. As DSSRC noted in a recent matter involving videos that were designated as “private” by a direct selling company, “[w]hile the videos are no longer available on the internet to a general audience of consumers, DSSRC cautioned the Company that because these videos included claims that were unrepresentative and not appropriately qualified, these videos should not be disseminated to even a limited audience in the context in which they were originally communicated on the Company’s public YouTube channel.”[3] Accordingly, with respect to private or password protected videos, DSSRC recommended that the Company take appropriate steps to assure that the YouTube videos cannot be shared or redistributed and, as such, determined that any videos designated as “private” should be disabled in their entirety to ensure that the video claims are not shared in their original context with even a limited audience.

DSSRC recognized Chalk Couture’s good faith actions to remove several Facebook posts which DSSRC determined could be interpreted as communicating that prospective participants in the Chalk Couture business opportunity can typically can earn significant and/or unlimited income. DSSRC determined that the removal of such posts was necessary and appropriate.

With respect to improper claims made by distributors that later became inactive distributors, DSSRC recommends that, promptly upon learning of such a claim, the Company make a bona fide good faith effort to contact the former distributor to request that the improper claim be removed. DSSRC also recommends that the Company take additional steps to remove such claims from the marketplace including utilizing the mechanism that websites and social media platforms may have for removal of trademark or copyright violations. If the subject claim by a former distributor occurs on a website or platform without a reporting mechanism, DSSRC recommends that the Company should also contact the website or platform in writing and request removal of the subject claim or post. Accordingly, DSSRC determined that the Company’s request to Facebook to remove the post was necessary and appropriate.

With respect to the YouTube video that Chalk Couture designated as “private”, DSSRC recommended that the Company take further action to disable the video to ensure that it cannot be shared or redistributed.

Chalk Couture™ takes consumer protection very seriously. As a company, we want to avoid any possible misunderstanding regarding the income potential that comes from being a Designer at Chalk Couture. We have worked diligently to have all identified income posts removed or altered to fit the appropriate verbiage when discussing the Chalk Couture opportunity. We have educated our Designers via weekly emails and social media posts to ensure they know how to talk about the opportunity, and how they can share it. The Company does provide a comprehensive compensation plan that shows how to achieve income while not promising any income potential.

[1] DSSRC also determined that the modification of two additional posts to remove references to “Make a full time income?” and “if you want to stay home [] with kiddos or replace an income” to be necessary and appropriate.