Jeunesse Global (“Jeunesse” or the “Company”) is a direct selling company headquartered in Orlando, Florida that sells beauty and wellness products.

This inquiry concerns earnings claims disseminated by salesforce members for the Company. The representative claims that formed the basis of this inquiry were disseminated on YouTube and Facebook. Those claims are set forth below: 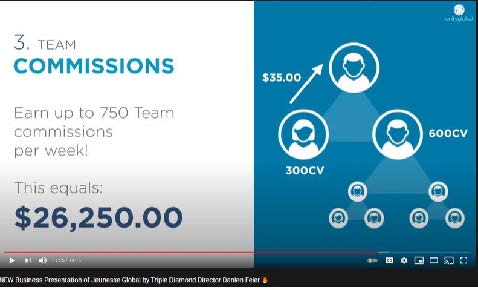 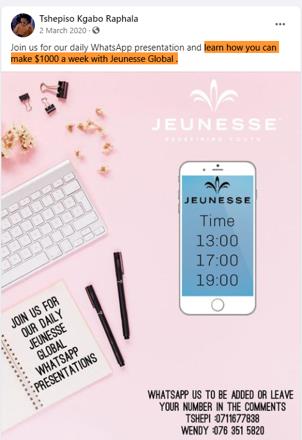 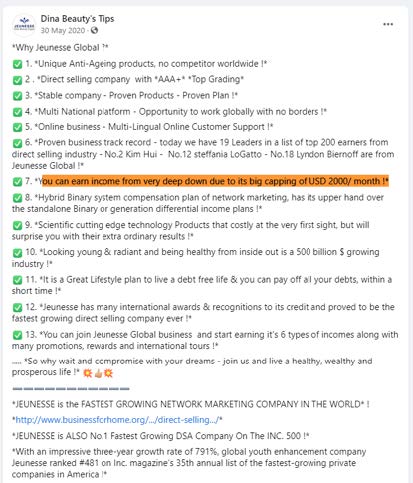 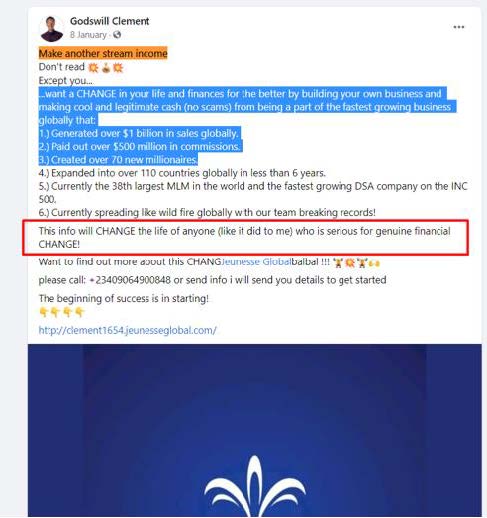 DSSRC informed the Company of its concern that such earnings claims may convey an unsupported message regarding the amount of income that can be typically earned through the Jeunesse business opportunity.

Jeunesse did not dispute that the claims DSSRC brought to its attention should be removed from circulation. The Company was responsive to DSSRC’s inquiry and took immediate steps to address the claims at issue.

With respect to the earnings claims at issue that originated from Facebook, Jeunesse removed all posts from circulation.

Similarly, the Company stated that the two YouTube videos have been removed.

DSSRC appreciated Jeunesse’s good faith actions to remove claims on social media sites which DSSRC determined communicated claims that prospective participants in the Jeunesse business opportunity can result in financial freedom and unlimited earnings. DSSRC determined that the removal of such claims was necessary and appropriate.

DSSRC determined that the claims at issue communicated the message of unlimited income (i.e., “This info will CHANGE the life of anyone (like it did to me) who is serious for genuine financial CHANGE!") and could be reasonably interpreted by consumers as meaning that they can expect to earn significant or substantial income from the Jeunesse business opportunity.

Although Jeunesse stated that it had removed both YouTube videos at issue, DSSRC noted that the video which included the claim “Earn up to 750 Team commissions per week! This equals $26,250.00” was designated as a “private” video and thus, remains accessible by a limited group of consumers.[1] As such, DSSRC continued with its analysis of the claim and determined that this claim could be reasonably interpreted by consumers as conveying a level of earnings that could be generally expected by the typical salesforce member. However, as acknowledged by Jeunesse, this unqualified earnings claim cannot be supported by the Company in the context in which it was presented on social media.

As stated in section 2 of the DSSRC’s Guidance on Earnings Claims for the Direct Selling Industry (“the Guidance”), for purposes of a DSSRC inquiry, an earnings claim includes “any statement, representation, or hypothetical scenario from which a current or prospective salesforce member could reasonably infer that he/she will earn a certain level or range of income” as well as “any chart, table, or mathematical calculation demonstrating possible income, actual or potential sales, or gross or net profits based upon a combination of variables.”

In the absence of any evidence indicating the amount of income that can be generally expected by the typical Jeunesse salesforce member, DSSRC recommended that the Company continue to take steps to remove the earnings claim “Earn up to 750 Team commissions per week! This equals $26,250.00” from the video or, alternatively, remove the video in its entirety.

While DSSRC appreciated the Company’s good faith efforts to remove the video from the public domain by listing it as “private,” DSSRC remained concerned that the video may nevertheless be re-purposed to a select group of potential downline salesforce members. As DSSRC noted in a recent matter involving videos that were designated as “private” by a direct selling company, “[w]hile the videos are no longer available on the internet to a general audience of consumers, DSSRC cautioned the Company that because these videos included claims that were unrepresentative and not appropriately qualified, these videos should not be disseminated to even a limited audience in the context in which they were originally communicated on the Company’s public YouTube channel.”[2]

In light of Jeunesse’s recognition that the remaining claim in the private video is an inappropriate earnings claim and as the Company has demonstrated a good faith intention to have the video removed in its entirety, DSSRC administratively closed this matter and will continue to check on the status of the remaining video to assure that it has been removed by the Jeunesse salesforce member.

DSSRC recognized Jeunesse’s good faith actions to remove several Facebook posts and YouTube videos which DSSRC determined communicated claims that prospective participants in the Jeunesse business opportunity can result in financial freedom and unlimited earnings. DSSRC determined that the removal of such posts was necessary and appropriate. DSSRC also recommended that the Company continue its communication with the salesforce members responsible for the remaining YouTube video which was marked “private” and which included the claim “Earn up to 750 Team commissions per week! This equals $26,250” to ensure that this video cannot be viewed, shared, or redistributed to even a limited audience of consumers.

[1] Jeunesse advised DSSRC that the video had been disabled in its entirety and provided a screenshot from the salesforce member responsible for the posting of the video and which indicated that the “Video is unavailable” and has been “removed by the user.” Notwithstanding, when clicking on the hyperlink, the video appears to still be designated as a “Private video” and invites viewers to “Sign in if you've been granted access to this video.”

McLean, VA – January 19, 2022 – The Direct Selling Self-Regulatory Council (DSSRC) opened a compliance inquiry to review advertising from Le-Vel Brands, LLC that had been the subject of an inquiry from 2020. DSSRC recommended that the new product performance and earnings claims identified in...
Read the Decision
Decision