Ad Watchers: Revisiting the Best Podcast Episode Ever: What is Puffery? 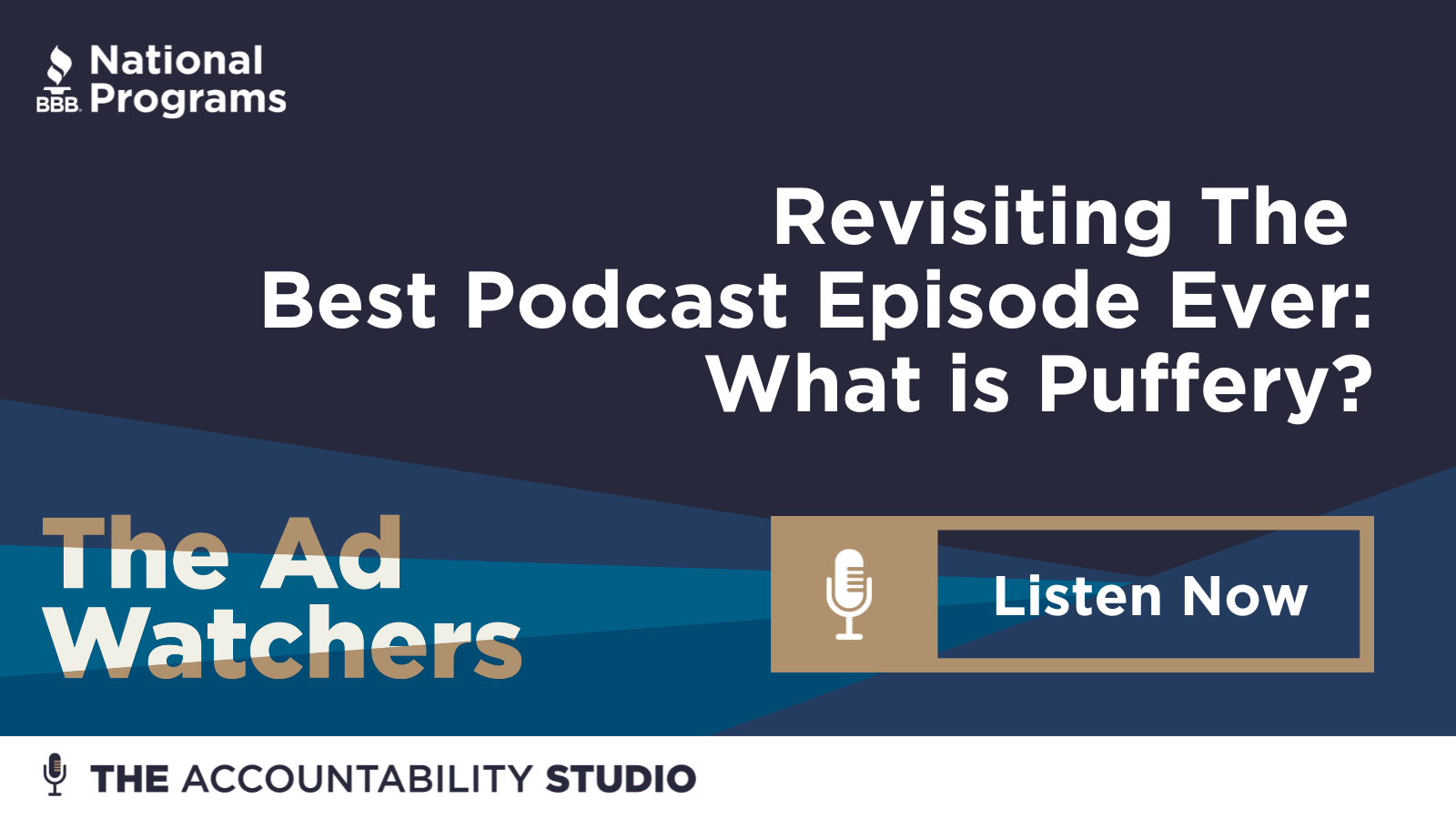 When you hear a claim in an advertisement like, “best in the world,” you probably know that the product has not been measurably proven to actually be the best in the world. And that’s okay, because this is an example of puffery, an exaggerated, blustering, or boastful statement or general claim that could only be understood to be an expression of opinion, not a statement of fact. But where is the line between puffery and a claim that needs a reasonable basis?

For the fifth episode of season two, hosts Eric Unis and Annie Ugurlayan reintroduce a fan favorite episode from season one. This is the episode where Eric made his Ad Watchers debut as a guest judge to discuss puffery, an exaggerated, blustering, or boastful statement that could only be understood to be an expression of opinion, not a statement of fact. But where is the line between puffery and a claim that needs a reasonable basis?

In this episode, join Eric as he judges the Puffery Battle Royale: A competitive game where each Ad Watchers host presents cases that illustrate various types of puffery based on what they think epitomizes that type of puffery. For each round Eric helps the audience understand how NAD may approach that form of puffery.

Advertising Law Basics: What is Puffery?

For the fifth episode of season two, hosts Eric Unis and Annie Ugurlayan reintroduce a fan favorite episode from season one. In this episode Eric makes his Ad Watchers debut as a guest,
joining hosts Hal Hodes and La Toya Sutton to discuss puffery.

There is no universal definition for this term, but La Toya provided the following description: “Puffery is an exaggerated, blustering, or boastful statement. Or a general claim that could only be understood as an expression of opinion, not a statement of fact.”

In cases where they are deciding what is and is not puffery, NAD asks the following questions:

Following their initial discussion, Hal and La Toya announce that this episode has a twist to it. To provide listeners with a deeper understanding of how NAD analyzes claims that may be puffery, Hal and La Toya created the Puffery Battle Royale. A competitive game where they each present cases that illustrate various types of puffery based on what they think epitomizes that type of puffery.

To judge the Battle Royale and further help the audience understand how NAD approaches puffery, they introduce their colleague Eric Unis.

Category One: Puffery as exaggeration

La Toya presented a 2001 NAD case involving baby formula. NAD concluded that when standing alone, in a non-comparative context, the claim in question was puffery. Hal provided an example from the 2006 film Idiocracy. In this film, the not-so-intelligent population of the futuristic world replaces water with a sports drink called “Brando.” Hal argued that the tagline for this drink, “the thirst mutilator,” was puffery because only the unreasonable people in that future would believe that claim.

Category Two: Puffery as an opinion

In this round, Hal presented a 2004 NAD case involving Hunt’s ketchup and their statement that “better tomatoes make better ketchup. Pick Hunt’s.” The decision, in this case, was that the tagline was a slogan of non-actionable opinion.

La Toya presented a 2017 case about the almond milk claim: “the best almonds make the best almond milk.” This claim served as proof of corporate pride in its product and was not a comparative claim.

Hal presented a case involving Campbells and their Prego Tomato Sauce. An advertisement showed two toddlers on a split-screen, with one eating their spaghetti and Prego sauce, while the toddler with Ragus was not. NAD found the visual was puffery because consumers would recognize that one-year-olds did not do a taste test.

In La Toya’s example of a flea and tick-killing product case, the challenger had an issue with how the advertisement depicted little green ninjas killing fleas and ticks on animals. NAD explained that this visual was puffery because “consumers are not in danger of believing that the product releases an army of ninja warriors on their pets from the advertising.”

Category Four: A statement that may have been puffery in isolation but was presented in the context of other claims that made it NOT puffery.

For the final round, La Toya presented a case where two Nyquil cold medicine advertisements with the statement, “the best sleep you ever had,” were challenged. One commercial provided additional context beyond that claim, and the other did not. In the first advertisement, the statement served as puffery. However, without the same context, NAD determined the second ad conveyed a message of superiority.

For his final case, Hal reintroduced us to Hefty’s classic line, “Hefty, hefty, hefty. Wimpy, wimpy, wimpy.” NAD found that in a radio advertisement, this line was puffery, but when used in a television commercial featuring John Cena and Rob Schneider, the visual commercial made Glad bags seem wimpy.

After the Puffery Battle Royale ended, they addressed key takeaways they hope listeners will remember. Hal and La Toya emphasized that puffery is about exaggeration and recommended avoiding being subtle. Also to remember that, just like with all other claims, context remains essential.

Go to the next episode of The Ad Watchers.

Ad Watchers: How Can You Ensure Your DEI Efforts Are Authentic?

As the expectation for representation has continued to rise, advertisers are turning to Diversity, Equity, Inclusion, and Belonging (DEIB) efforts to ensure everyone feels seen. NAD recognizes the significance of authenticity in these diverse depictions and will be enforcing new standards to hold companies accountable when they endorse harmful...

When we count steps with fitness trackers, log weight and diet information into apps, and share personal health information on platforms not covered by HIPAA, how is that information we input collected,...

The Future of EU-U.S. Data Transfers

On October 7, the negotiations between the U.S. and European Commission regarding the future of the data privacy frameworks behind the Privacy Shield program were completed with the release of a Presidential Executive...

Ad Watchers: Where is the Line Between Ethical Design and Dark Patterns?

Think about the times you felt tricked or frustrated by a membership or subscription that had a seamless signup process but was later difficult to cancel. Something that should be simple and transparent can be complicated, intentionally or unintentionally, in ways that impair consumer choice. These are examples of dark patterns. Unfortunately,...

Listen to the Podcast