Reliv International, Inc., (or the Company) is a multilevel direct-selling company located in Chesterfield, Missouri that markets and distributes nutritional supplements and personal care products.

This inquiry concerned product performance claims and earnings claims disseminated on Facebook and YouTube accounts of Company salesforce members. Those claims are set forth below: 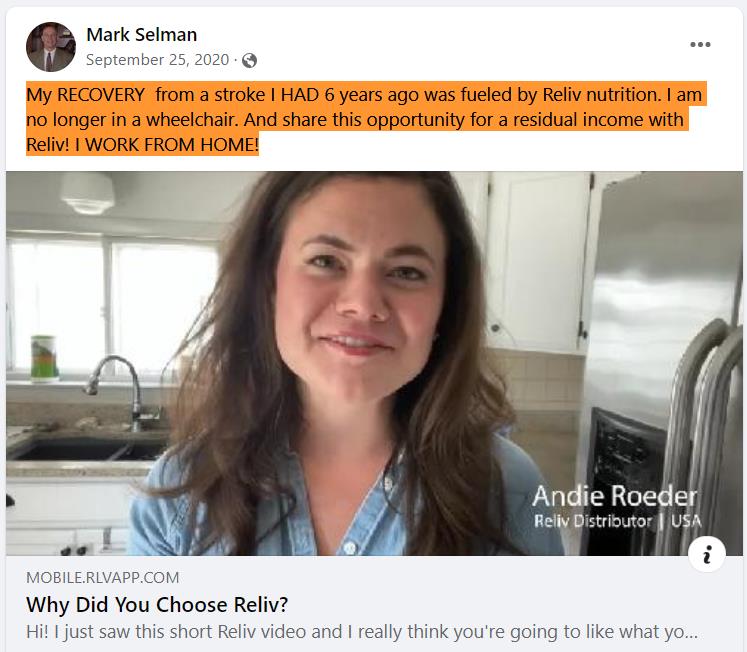 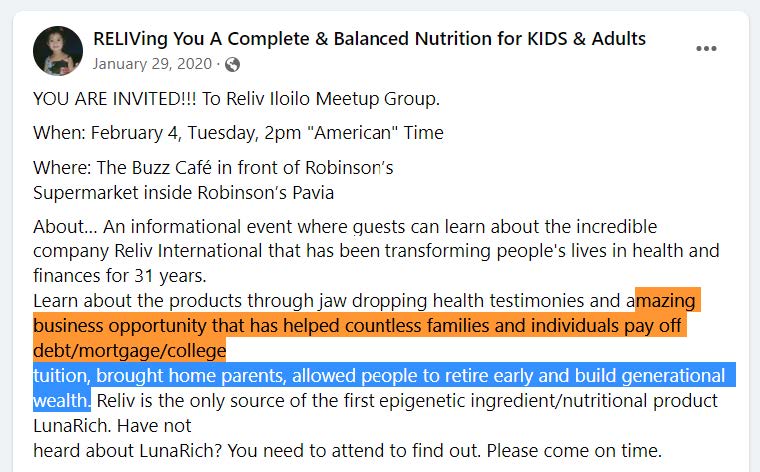 DSSRC expressed its concern to the Company that the social media posts communicate that Reliv products are effective in treating a number of health-related conditions and that salesforce members typically earn significant income from the Reliv business opportunity.

Shortly after receipt of the DSSRC Notice of Inquiry, the Company immediately took steps to contact the salesforce members responsible for the social media posts at issue and request they modify the posts to eliminate the unauthorized claims or remove the posts in their entirety.

More specifically, the Company disabled 14 of the 17 social media posts brought to its attention. With respect to the three remaining posts at issue, Reliv was able to facilitate the modification of a YouTube video that was disseminated by a salesforce member from the Philippines and have all references to autism deleted. The Company also modified a Facebook post by having the reference to a “$2,000 bonus and residual income” removed.

Lastly, the Company informed DSSRC that, despite its best efforts, it was unable to identify the owner of the social media post which included the “Boost your immune system against Coronavirus or CCP virus” claim. Reliv called DSSRC’s attention to a comment that the Company placed on the post in 2020 indicating that the post was unauthorized and needed to be removed. Reliv also posted another similar comment on the post shortly after receiving DSSRC’s Notice of Inquiry.

DSSRC appreciated the good faith efforts of Reliv to address its concerns at issue in the inquiry. The Company chose not to provide evidence to support the claims at issue and, instead, elected to contact the salesforce members responsible for the posts and facilitate the removal or modification of the subject claims.

As DSSRC has noted in several previous inquiries[1], health-related claims must be supported by competent and reliable evidence, demonstrating that the product can perform as claimed. The Federal Trade Commission’s (“FTC”) standard of competent and reliable scientific evidence has been defined in FTC case law as “tests, analyses, research, studies, or other evidence based on the expertise of professionals in the relevant area, that has been conducted and evaluated in an objective manner by persons qualified to do so, using procedures generally accepted in the profession to yield accurate and reliable results.”[2]

As such, DSSRC determined that the actions taken by the Company to have the claims removed were necessary and appropriate.

With respect to the remaining Facebook post (“Boost your immune system against Coronavirus or CCP virus”) it was clear to DSSRC that the Company had made a bona fide attempt to have the claim taken down as evidenced by the comment Reliv included in the individual’s social media feed in 2020 noting the claim was not authorized by the Company and should be removed. The Company also placed a second comment on the same social media feed shortly after being notified of the DSSRC inquiry.[3]

DSSRC determined that Reliv had taken genuine, good faith actions to address the concerns in this inquiry by modifying or removing 16 of the 17 social media posts brought to its attention. Additionally, DSSRC concluded that the Company made a concerted effort to have the remaining post removed before it had received DSSRC’s Notice of Inquiry and then took further action to make it clear that the post was unauthorized.

Based on these actions, DSSRC administratively closed the inquiry.

[3] In follow-up conversations with Reliv, DSSRC also recommended that the Company utilize the social media platform’s reporting mechanism for intellectual property violations and, if necessary, contact the platform in writing and request the removal of the social media post. Reliv advised DSSRC that it would attempt to take this additional step.