Visi (or the “Company”) is a direct-selling company headquartered in Pleasant Grove, Utah. The Company specializes in selling a variety of health-related products, including protein, essential oils, and extracts they advertise as boosting immunity, skin care, energy, and other effects.

The Direct Selling Self-Regulatory Council (“DSSRC”) is a national advertising self-regulation program administered by BBB National Programs. This inquiry was commenced by DSSRC pursuant to its ongoing independent monitoring process, which monitors advertising and marketing claims made in the direct selling industry.

DSSRC’s inquiry involved eight health-related product claims disseminated by Visi’s salesforce members as well on the Company’s website. DSSRC informed Visi of its concern that such claims communicate a message that Visi’s products can effectively treat serious health-related conditions and provide protection against and relief from bacteria, viruses, pain, and more.

While the inquiry remained open, DSSRC identified a ninth health-related product claim disseminated by a salesforce member from Visi. The claim was identified as part of DSSRC’s ongoing monitoring process and sent in follow-up communications with Visi. The post suggested that one of Visi’s products may be effective against COVID-19.

The product claims are set forth below: 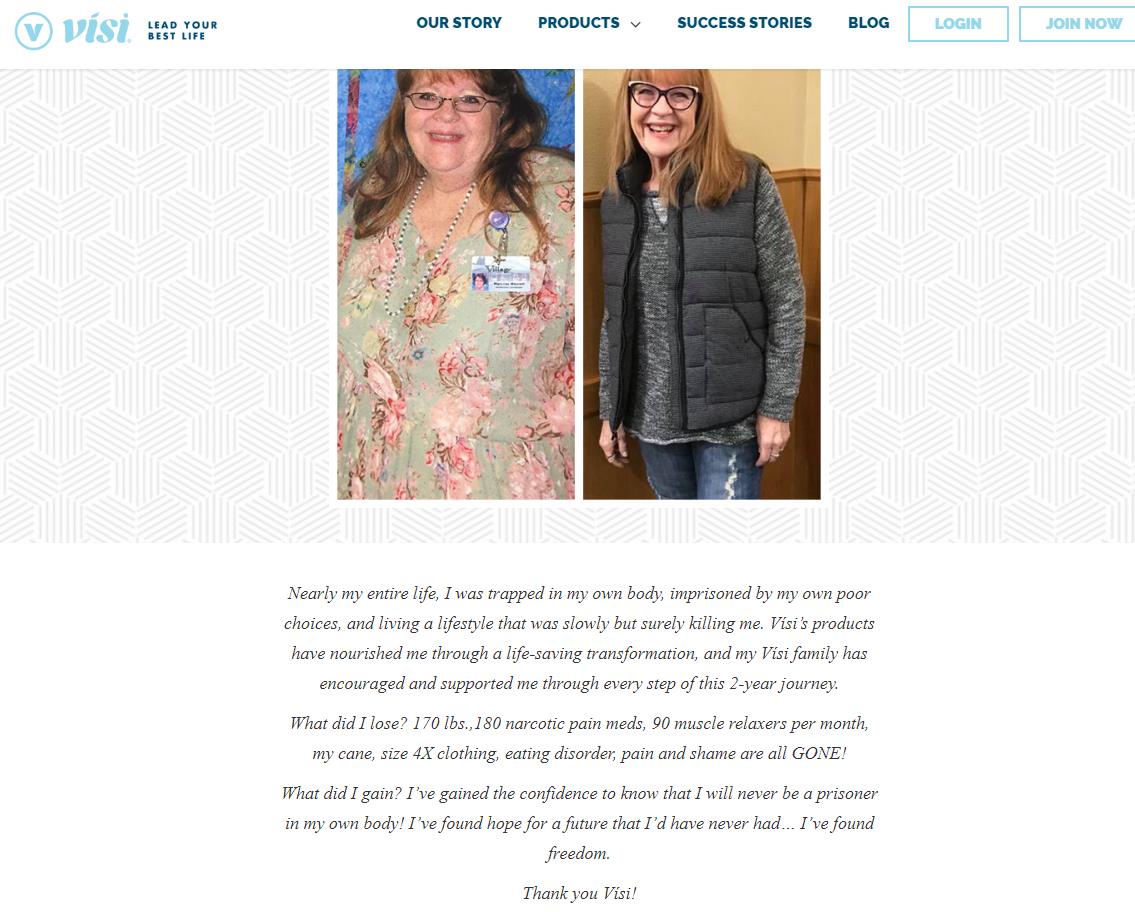 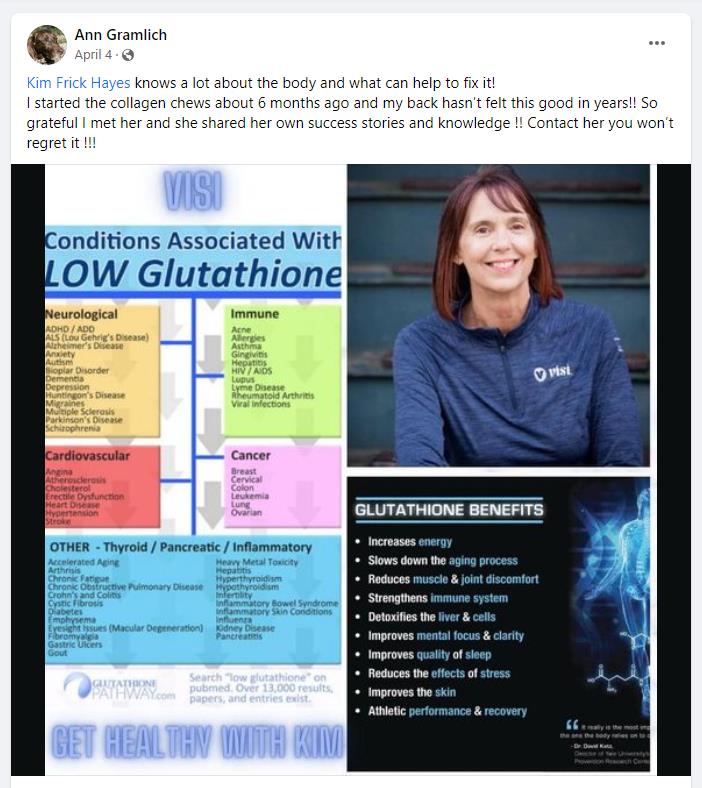 In response to DSSRC’s notice of inquiry, Visi did not provide any written submission to DSSRC’s communications. However, the Company demonstrated a good faith effort to address DSSRC’s concerns by successfully removing three of the nine posts brought to its attention by DSSRC. The remaining six posts were disseminated on Facebook, YouTube, and on the company’s testimonial page on the Visi website.

It is a long-held principle of advertising law that a Company must have substantiation for any reasonable interpretation of its advertising claims.[1] As DSSRC has noted in previous inquiries,[2] health-related claims must be supported by reliable and competent scientific evidence. The Federal Trade Commission’s (“FTC”) standard of competent and reliable scientific evidence has been defined in FTC case law as "tests, analyses, research, studies, or other evidence based on the expertise of professionals in the relevant area, that has been conducted and evaluated in an objective manner by persons qualified to do so, using procedures generally accepted in the profession to yield accurate and reliable results."[3]

Although Visi did remove one weight loss testimonial identified by DSSRC from the Company website, the second testimonial which references extraordinary weight loss achieved by a Visi product user remains accessible to consumers absent any disclosure of typical weight loss results that may be generally expected by consumers. According to the FTC Guides on the Use of Endorsements and Testimonials in Advertising, an advertisement “relating the experience of one or more consumers on a central or key attribute of the product…will likely be interpreted as representing that the endorser’s experience is representative of what consumers will generally achieve with the advertised product.”[4] If the advertiser does not have substantiation for such representation, then “the advertisement should clearly and conspicuously disclose the generally expected performance in the depicted circumstances.”[5] Such substantiation, as noted in previous DSSRC inquiries,[6] has been defined in FTC case law as "tests, analyses, research, studies, or other evidence based on the expertise of professionals in the relevant area, that has been conducted and evaluated in an objective manner by persons qualified to do so, using procedures generally accepted in the profession to yield accurate and reliable results.”[7]

Visi did not provide substantiation for the testimonial claim nor any indication that the results depicted may be atypical. DSSRC thus determined that the post should be discontinued in the context presented on the Visi website.

With respect to the posts disseminated by independent salesforce members, DSSRC determined that claims referencing the efficacy of specific ingredients in the Company’s products could be reasonably interpreted by consumers as meaning that the dosage of those ingredients contained in Visi’s products would confer the same health benefits stated in those posts. However, the Company provided no data to DSSRC demonstrating that the products and/or ingredients as contained in its product can provide such health benefits. When making general statements about the efficacy of an ingredient contained in an advertised product, unless an advertiser has consumer perception data showing otherwise, consumers may reasonably interpret ingredient efficacy statements as meaning that the product itself will provide the same results as claimed in the advertisement or social media post. Similarly, when making claims based on ingredients contained in a product, an advertiser bears the burden of demonstrating that the ingredient contained in the product is of the same dosage, formulation, and route of administration as any underlying studies submitted in support of its health claims.[8] Notwithstanding, Visi has not provided any studies to DSSRC as support for its claims.

In addition, as a demonstration of the Company’s good faith efforts that were taken to address DSSRC’s concerns, DSSRC requested that Visi provide a description of the efforts the Company has taken to contact the salesforce members responsible for those social media posts that it was not able to have removed. However, the Company did not respond to DSSRC’s request.

While DSSRC appreciates Visi’s good faith efforts in effectuating the removal of three of the nine posts, it was determined that the remaining social media posts could be interpreted as communicating health-related benefits that consumers will receive as a result of using the Company products. Posts that remain accessible include claims that Visi products offer protection against “damaging bacteria, viruses, pollutants, and free radicals” and “Adds extra years to your life by preventing the onset of heart disease, stroke, Alzheimer’s disease, arthritis, and Parkinson’s disease.” As the Company has not provided DSSRC with any evidence demonstrating that its products perform as claimed, it was concluded that the social media posts should be removed.

Finally, if the social media posts at issue were disseminated by salesforce members who may no longer be active salesforce members with Visi, it is nevertheless incumbent on the Company to demonstrate that it made a good faith attempt to contact the individual responsible for the unauthorized and request that it be removed. As DSSRC has noted in previous inquiries, when a direct selling company is made aware of an improper claim that was made by an individual and the company recognizes the claim to be untrue and unsupported, DSSRC acknowledges that the direct selling company may not be able to require the individual to remove the claim. In that instance, DSSRC nonetheless recommends that the direct selling company make a bona fide good faith effort to have the improper claim removed, including by attempting to contact the individual in writing. If the social media platform where the subject post was made provides a mechanism for reporting trademark or copyright violations, DSSRC recommends that the direct selling company promptly utilize such mechanism and seek removal of the subject claims and posts.[9] If efforts to utilize a mechanism for reporting trademark or copyright violations are unsuccessful or if the subject claim occurred on a website or platform without a reporting mechanism, DSSRC recommends that in addition to making a bona fide good faith effort to contact the individual as described above, the Company contact the website or platform in writing and request removal of the subject claim or post.

DSSRC expressed its appreciation to Visi for its good faith actions in removing three of the nine posts at issue. However, because the remaining posts communicate claims that the Company’s products are effective at treating serious health-related conditions and no evidence has been provided by Visi supporting such claims, DSSRC recommended that the remaining social media posts at issue be removed. In addition, should the Company be unable to contact the salesforce members responsible for the remaining posts and effectuate removal, as a demonstration of its bona fide, good faith efforts, it is requested that Visi provide DSSRC with copies of the take-down requests that it sent to those salesforce members.

“Visi acknowledges and hears the notice that has been provided and states that we have taken action to remove, where possible, some of the posts that we were made aware of. We will continue to make further efforts and will continuously self-monitor in good faith to preserve the integrity of our advertising and marketing.”

[4] See section 2(b) of FTC Guides Concerning the Use of Endorsements and Testimonials in Advertising..