B-Epic Worldwide, LLC (“B-Epic” or the “Company”) is a multi-level direct-selling company located in Layton, Utah that markets health, detox, and fitness products.

This inquiry concerns earnings and product claims disseminated by the Company‘s salesforce members on social media. The representative claims that formed the basis for this inquiry are set forth below: 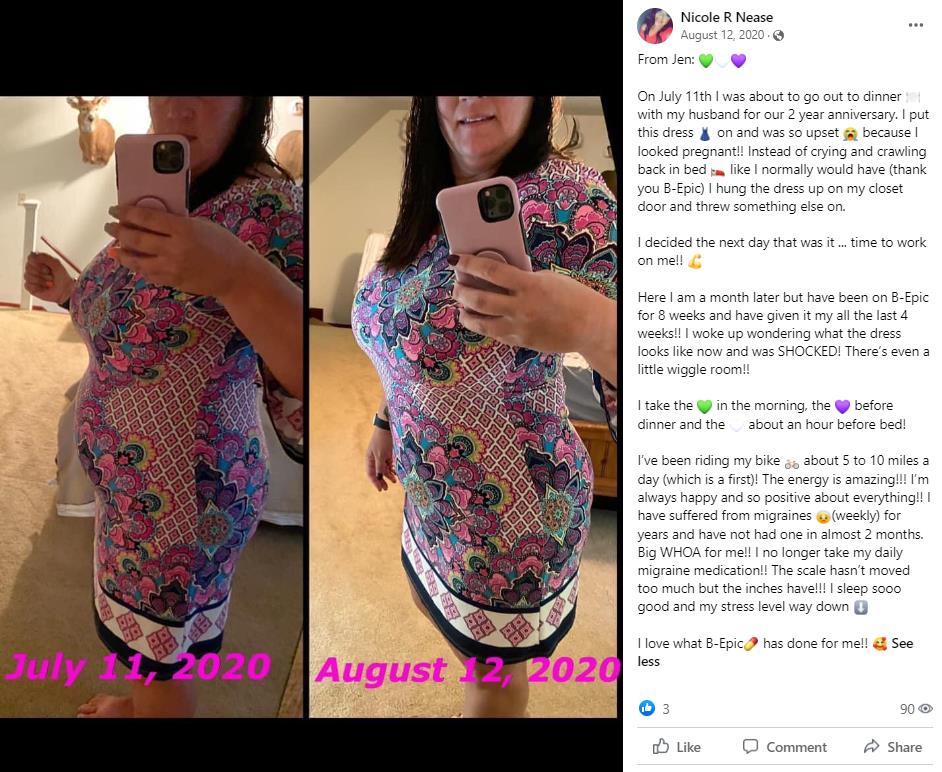 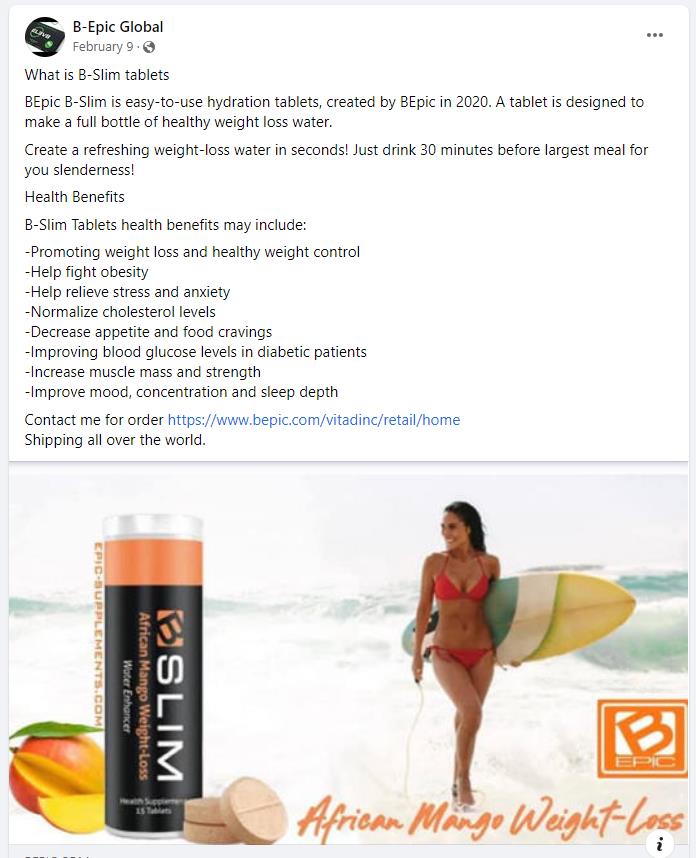 B-Epic did not dispute that the claims identified by DSSRC were inappropriate and did not attempt to provide DSSRC with evidence to substantiate the claims.

Upon receipt of DSSRC’s Notice of Inquiry, the Company began attempting to contact the salesforce members responsible for the posts at issue and requested that the posts be removed.

B-Epic was successful in removing eight of the twelve posts (including the one earnings claim post) identified by DSSRC.

With respect to the remaining four posts, the Company provided DSSRC with copies of the three separate notices that were sent to each of the four salesforce members who were responsible for the claims, including the “final notice.” The Company informed DSSRC that because those four salesforce members failed to respond to the Company’s take-down request, their accounts have been suspended and locked.

DSSRC found that the one earnings claim that was brought to the attention of B-Epic and which referenced “making a million dollars” was inappropriate and necessitated removal. Although the social media post at issue did not include a disclosure of generally expected results, DSSRC determined that even a clear and conspicuous disclosure would be ineffective to qualify the amount of earnings referenced in the post. As DSSRC notes in its Earnings Claim Guidance, depending on the level of success, some income claims and lifestyle claims may be so extraordinary that they cannot be effectively qualified by disclosure of generally expected results.[2]

As such, DSSRC determined that the Company’s efforts to have the post removed were necessary and appropriate.

DSSRC appreciated the good faith actions taken by B-Epic to remove seven of the eleven social media posts that referenced the efficacy of B-Epic products to address health-related conditions.

As noted above in the Company Position, B-Epic did not attempt to provide evidence to substantiate the product performance claims at issue in this inquiry. In the absence of reliable evidence to support the product claims, DSSRC agreed that the Company’s efforts to have the social media posts removed were necessary and appropriate. DSSRC noted that the performance claims which reference results such as relieving stress and anxiety, normalizing cholesterol levels, improving blood glucose levels in diabetic patients, increasing mood and concentration, decreasing inflammation, etc., were substantive claims pertaining to health-related conditions that would require reliable and competent scientific evidence as substantiation for such representations.

As DSSRC has noted in previous inquiries, the Federal Trade Commission’s (“FTC”) standard of competent and reliable scientific evidence has been defined in FTC case law as "tests, analyses, research, studies, or other evidence based on the expertise of professionals in the relevant area, that has been conducted and evaluated in an objective manner by persons qualified to do so, using procedures generally accepted in the profession to yield accurate and reliable results.'[3]

When a direct selling company such as B-Epic is made aware of an improper claim that was made by an individual that was an active distributor when the claim was made but that has since become an inactive distributor of the company, DSSRC acknowledges that the direct selling company may not be able to require the former distributor to remove the claim. In that instance, DSSRC nonetheless recommends that the direct selling company make a bona fide good faith effort to have the improper claim removed. Here, DSSRC concluded that the Company demonstrated a bona fide, good faith effort to address DSSRC’s concerns by contacting the salesforce members responsible for the social media posts and requesting that they be removed. With respect to the four posts that remain publicly available, B-Epic provided DSSRC with copies of the notices sent by its compliance team to the salesforce members and suspended those individuals’ accounts when they failed to respond to the Company’s request to take down the posts at issue.

Notwithstanding these efforts, DSSRC recommends that the Company attempt to contact the social media platform where the posts were disseminated to inform the platform that the posts include inappropriate claims not authorized by the Company and request that the posts be removed. As DSSRC noted in previous inquiries, if the social media platform where the subject post was made provides a mechanism for reporting trademark or copyright violations, DSSRC recommends that the direct selling company promptly utilize such mechanism and seek removal of the subject claims and posts. If the subject claim occurred on a website or platform without a reporting mechanism, DSSRC recommends that in addition to contacting the former distributor in writing as described above, the Company contact the website or platform in writing and request the removal of the subject claim or post.[4]

Finally, the Company may wish to consider posting a comment on the social media feed of the salesforce members responsible for those posts indicating that such posts are not authorized by B-Epic and that its products are not intended to diagnose, treat, cure, or prevent any serious health-related conditions

DSSRC expressed its appreciation for B-Epic’s actions in removing the one earnings claim at issue as well as seven of the eleven social media posts that referenced the efficacy of the Company’s product to treat health-related conditions. In the absence of evidence supporting such claims, DSSRC concluded that B-Epic’s actions to seek the removal of the posts were necessary and appropriate. With respect to the four posts pertaining to product performance that have not been taken down by the Company’s salesforce members, DSSRC determined that B-Epic demonstrated a bona fide, good faith effort to address DSSRC’s concerns by contacting the salesforce members responsible for the posts and requesting that such claims be removed and, ultimately, suspending the accounts of those individuals when they failed to respond to the Company’s take-down requests.

“B-Epic Worldwide LLC agrees to take DSSRC’s recommendations into consideration. We are grateful that DSSRC recognized our good faith efforts to assure that our salesforce members are conducting themselves compliantly pursuant to our Company Policy & Procedures.”