My Lala Leggings, Inc. (“Lala Leggings” or the “Company”) is a multi-level marketing company headquartered in Palmdale, CA and founded in 2014 that sells women’s clothing, specializing in leggings.

This inquiry concerned nine earnings claims disseminated by Company salesforce members. The representative claims that formed the basis of this inquiry were communicated on Facebook and YouTube. Those claims are set forth below: 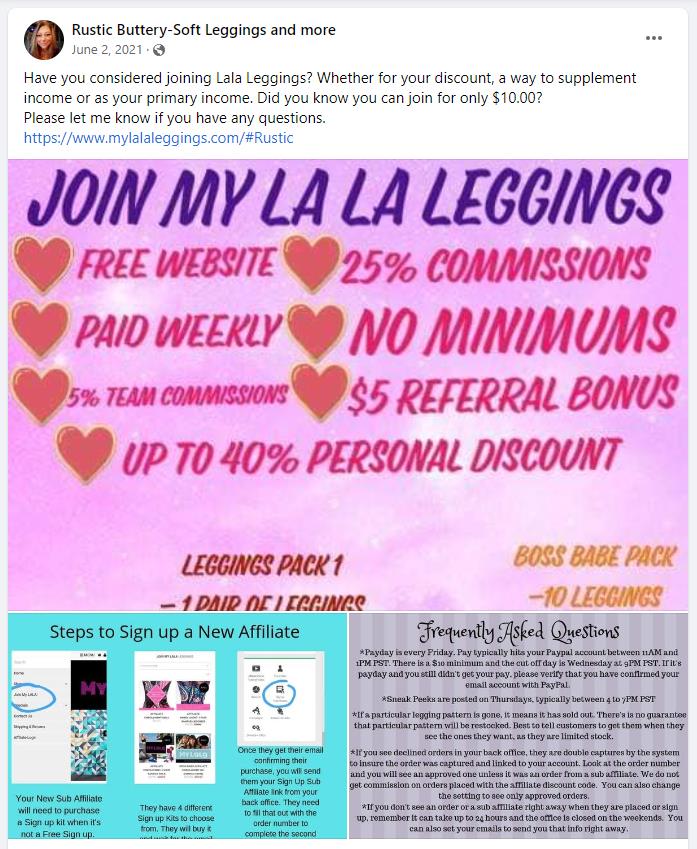 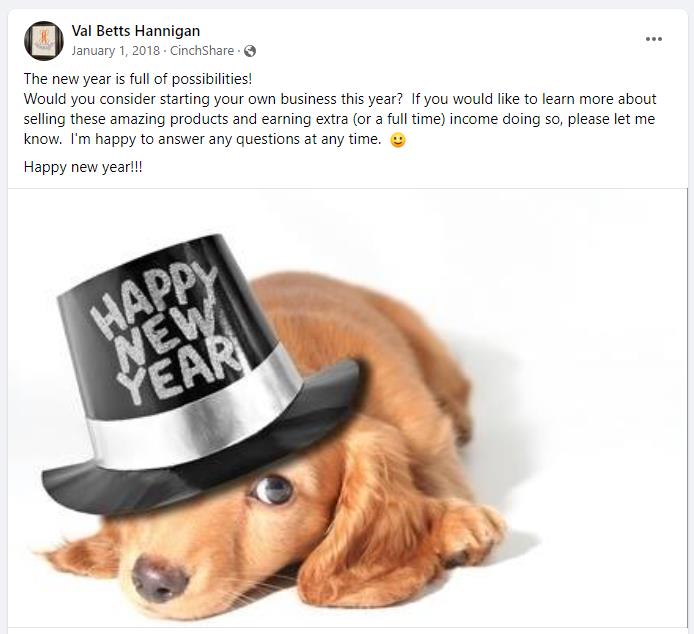 The Company promptly responded to DSSRC’s inquiry and took several steps to address the claims identified by DSSRC.

The Company informed DSSRC that almost all of the identified posts were disseminated more than three years ago and the individuals responsible for the posts are no longer affiliated with Lala Leggings.

The Company stated that it was able to facilitate removal of two of the posts at issue and attempted to contact the salesforce members responsible for the remaining posts. As a demonstration of its efforts to address DSSRC’s concerns, Lala Leggings provided copies of screenshots of the publicly accessible social media posts which included the Company’s request (in the posted comments section of the social media post) that the post be removed (“… this post goes against company policy and guidelines for affiliates. We kindly request your help in deleting this post.”).

Lala Leggings also noted that it has reached out to Facebook and YouTube to have the posts removed and provided screenshots to DSSRC that confirmed the platform received the Company’s request to remove the posts.[2]

My Lala Leggings also reaffirmed its commitment to enhancing its training program of Company salesforce members and confirmed that it has begun working with a third-party service to provide monitoring oversight of the messages communicated by current and past salesforce members.

DSSRC noted that this is the second inquiry it has commenced against Lala Leggings in 2022.[3] Unlike the previous inquiry, all but one of the social media posts that were the subject of this inquiry were communicated prior to 2021. Notwithstanding the date of these posts, DSSRC concluded that it was incumbent on Lala Leggings to demonstrate that it is using its best efforts to address DSSRC’s concerns regarding inaccurate claims pertaining to the amount of income that could be expected by the Company’s business opportunity.

The Company was successful in removing one of several claims communicating that prospective salesforce members could expect to receive financial freedom from joining Lala Leggings, as well as the claim that the earnings from the business opportunity can serve as an individual’s “primary income”. DSSRC determined that the Company’s removal of those posts and its good faith attempt to remove the remaining posts referencing “financial freedom, “full time income” and earning “real money” were necessary and appropriate.

As stated in DSSRC’s Guidance on Earnings Claims for the Direct Selling Industry, while DSSRC will evaluate any claim based upon the context in which the claim appears and the potential net impression of such claim to the audience, some words and phrases commonly used in earnings claims can carry a particularly high risk of being misleading to consumers. Such words and phrases include claims such as “financial freedom,” “full-time income,” “replacement income,” “residual income,” and “career-level income.” Furthermore, earnings claims must be substantiated and representative of a level of earnings that can be generally expected by the audience.[4]

DSSRC also recognized that the social media posts at issue were all disseminated by salesforce members that are no longer affiliated with the Company. When a direct selling company such as Lala Leggings is made aware of an improper product or income claim that was made by an individual that was an active distributor when the claim was made but that has since become an inactive distributor of the company, DSSRC acknowledges that the direct selling company may not be able to require the former distributor to remove the claim. In that instance, DSSRC nonetheless recommends that the direct selling company make a bona fide, good faith effort to have the improper claim or post removed.[5]

Accordingly, DSSRC concluded that the Company’s actions to: a) contact the inactive salesforce members responsible for the posts to request that the posts be removed and b) correspond with the social media platforms where the posts appear to inform them that the posts were unauthorized and request they be removed, demonstrated a bona fide good faith effort to address DSSRC’s concerns.

DSSRC is encouraged that Lala Leggings is working with a third-party monitoring service to identify inaccurate claims disseminated by current and past sales force members and DSSRC will continue to monitor the Company’s online marketing materials to ensure that the Company and its salesforce members are not mischaracterizing the company’s business opportunity.

Based on the foregoing, DSSRC administratively closed this inquiry based upon Lala Leggings’ bona fide, good faith efforts to have the improper claims removed.

[1] This claim was disseminated by 4 different individuals on separate social media posts.

[2] The platform notifications also indicated that a determination had not yet been made regarding the outcome of the Company’s request.