This inquiry included six product performance claims and one earnings claim that were disseminated by Company salesforce members. The representative claims, several of which originated outside of the United States, formed the basis of this inquiry and were communicated on Facebook and LinkedIn. Those claims are set forth below. 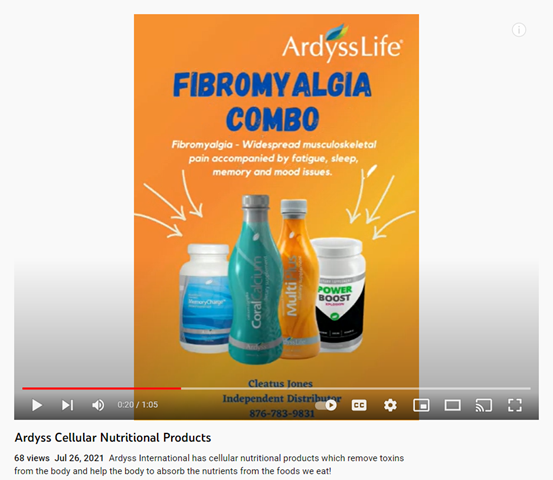 • “Every day you have a great opportunity to start achieving your goals. What are your goals in 1, 5, or 10 years? #millionaire minds”

Ardyss stated that the company promotes a healthy lifestyle, offers quality products, and is committed to be transparent and ethical about the way it markets its products to the public.

Ardyss did not attempt to substantiate the claims at issue and, instead, took action to facilitate the removal of the social media posts. More specifically, five of the seven posts that were the subject of DSSRC’s inquiry were removed by the Company after its receipt of DSSRC’s Notice of Inquiry.

The Company informed DSSRC that it had reached out to the salesforce members responsible for the two remaining social media posts but was unable to contact the individuals and have the posts removed. In addition, the Company stated that it would report the posts to FaceBook and YouTube and advise DSSRC when the social media posts have been removed.

DSSRC appreciated the good faith actions taken by Ardyss to address its concerns. The Company was successful in removing five of the seven posts brought to its attention by DSSRC and adequately demonstrated that it was making an ongoing, bona fide effort to address DSSRC’s concerns with respect to the remaining posts. DSSRC determined that the Company’s actions were necessary and appropriate.

One post that remains publicly accessible is a YouTube video that promotes a combination of Ardyss nutritional products which are to be used to treat hypertension, fibromyalgia, hyperthyroid conditions, ADHD, diabetes, and fibroids.

As DSSRC has noted in previous inquiries, health-related claims and establishment claims must be supported by reliable and competent evidence demonstrating that the product can perform as claimed. The Federal Trade Commission’s (“FTC”) standard of competent and reliable scientific evidence has been defined in FTC case law as "tests, analyses, research, studies, or other evidence based on the expertise of professionals in the relevant area, that has been conducted and evaluated in an objective manner by persons qualified to do so, using procedures generally accepted in the profession to yield accurate and reliable results."1

As Ardyss has not submitted the prerequisite evidence to support the message communicated in these two posts, DSSRC agreed with the Company’s committed efforts to effectuate the removal of the posts.

When a direct selling company such as Ardyss is made aware of an improper product claim that was made by an individual that was an active distributor when the claim was made but that has since become an inactive distributor of the company, DSSRC acknowledges that the direct selling company may not be able to require the former distributor to remove the claim. In that instance, DSSRC nonetheless recommends that the direct selling company make a bona fide, good faith effort to have the improper claim or post removed. Here, DSSRC concluded that Ardyss demonstrated that it has made a good faith effort to address the concerns at issue in this inquiry by removing five of the social media posts brought to its attention and through its commitment to contact Facebook and YouTube and report the posts as unauthorized and in violation of the company intellectual property rights.

Based upon the foregoing, DSSRC administratively closed its inquiry. DSSRC will continue to check on the status of the two remaining social media posts as well as other claims disseminated by Ardyss salesforce members and reserves its right to commence a compliance inquiry pursuant to section VIII of the DSSRC Policy & Procedures should it identify a pattern of the same or similar product performance claims being communicated on behalf of the Company.

DSSRC administratively closed the inquiry based upon Ardyss’ good faith actions to remove five of the seven social media posts at issue and its commitment to report the remaining two posts to the respective platforms. It was also noted that DSSRC reserves it right to commence a compliance inquiry should it identify a pattern of the same or similar product performance claims being communicated on behalf of the Company.