Tealightful Treasures, Inc. (“Tealightful” or the “Company”) is a retail company with a direct-to-consumer website based in Rochester, New York. The company was founded in 2000 and markets several varieties of loose-leaf tea products.

This inquiry was commenced by DSSRC pursuant to its ongoing independent monitoring of advertising in the direct selling marketplace and concerns product and earnings claims disseminated by the Company and its salesforce members.

The representative claims that formed the basis of this inquiry are set forth below: 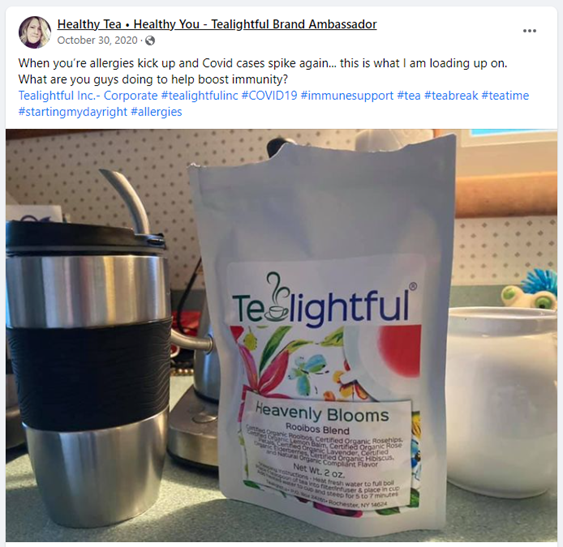 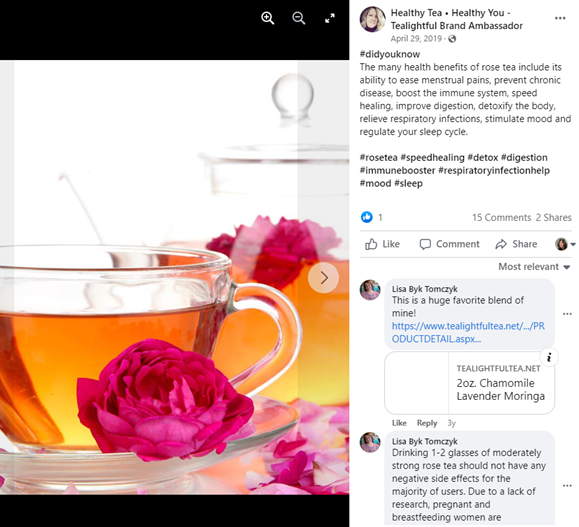 Shortly after its receipt of the DSSRC Notice of Inquiry, Tealightful contacted DSSRC and explained that although the Company was originally a multi-level direct selling company, as of December 21, 2019, Tealightful changed its business model and is now a retail company. Tealightful does maintain a direct-to-consumer website, which is the only method in which Company products may be purchased. In addition, the Company has since phased out its Brand Ambassador program and no longer utilizes an independent salesforce.

Accordingly, the Company maintained that DSSRC does not have jurisdiction to go forward with its inquiry because Tealightful is no longer a direct selling company.

Notwithstanding its jurisdictional position, the Company informed DSSRC that it has attempted to contact the individuals responsible for the subject social media posts and request that the posts/claims be removed.

Although DSSRC expressed its concerns regarding the messages communicated in the product performance claims disseminated in the social media posts at issue, it recognized that because Tealightful no longer utilizes the direct selling business model to sell products to consumers, this matter was outside of DSSRC’s jurisdictional purview.

As noted in section III of the DSSRC Policy and Procedures, DSSSC reviews earnings claims and product claims made by any direct selling company (i.e. companies who sell their products and services directly to consumers through an independent salesforce) and/or its salesforce members and evaluates the truthfulness, accuracy, and substantiation of such earnings claims and product claims. Accordingly, as Tealightful no longer provides an income opportunity through a direct selling business model and does not utilize an independent salesforce to sell or market its products, DSSRC agreed that it does not have the appropriate jurisdiction of the matter and, as such, has administratively closed the inquiry.

DSSRC expressed its appreciation to the Company for its commitment to contact the individuals responsible for the social media posts and request that they be removed.