Stella & DOT, LLC (“Stella & DOT” or the “Company”) is a multi-level direct selling company that sells jewelry, bags, accessories, and women’s clothing. The Company was founded in 2004 and is located in Hillsborough, California. 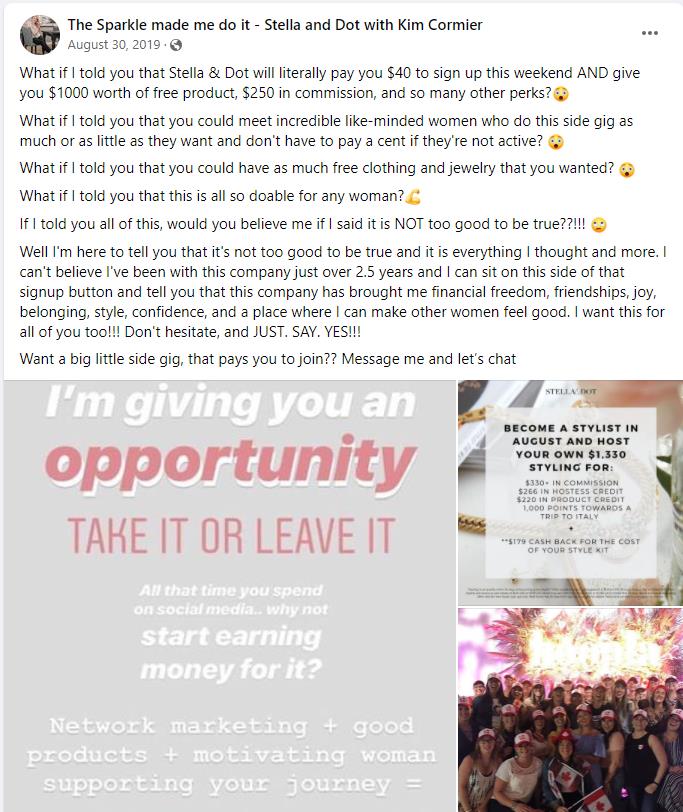 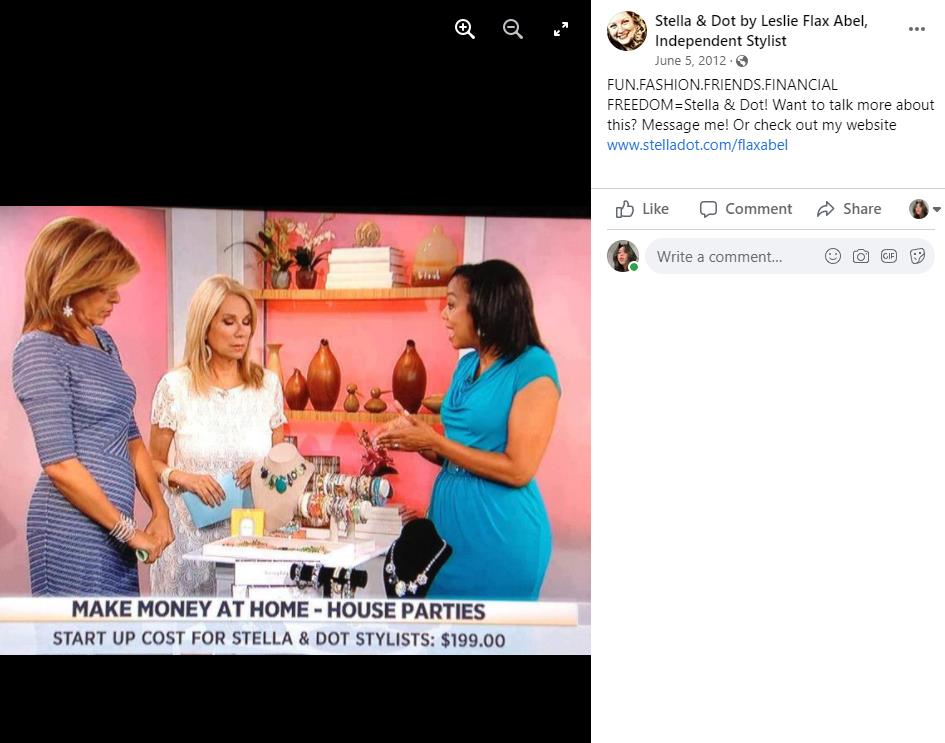 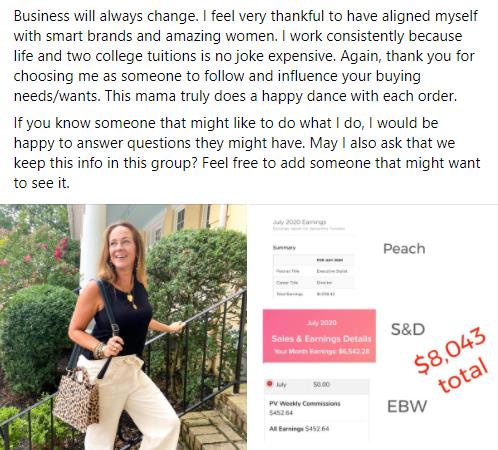 DSSRC informed the Company of its concern that earnings claims such as these including claims of “financial freedom” may convey a message that the typical participant in the Company’s business opportunity will earn significant income.

The Company did not attempt to provide support for the claims at issue in the social media posts identified by DSSRC and stated that, following receipt of the self-regulatory inquiry, it immediately attempted to contact the salesforce members who were responsible for the posts and requested that they be removed. The Company was able to have three of the twelve posts at issue disabled.[2]

As stated in the DSSRC Guidance for Earnings Claim in the Direct Selling Industry (the “DSSRC Earnings Claims Guidance”), a direct selling company is responsible for the earnings claims made by its salesforce members.[3] DSSRC appreciated the efforts of Stella & DOT to have three of the twelve posts at issue removed from Facebook, an action which DSSRC determined was necessary and appropriate.

All but one of the posts at issue included the claim that potential salesforce members can achieve financial freedom by participating in the Stella & DOT business opportunity (the other post indicated that a Company salesforce received monthly earnings of $6,542.28). As noted in section 5 of the DSSRC Earnings Claims Guidance,[4] while DSSRC will evaluate any claim based upon the context in which the claim appears and the potential net impression of such claim to the audience, some words and phrases commonly used in earnings claims can carry a particularly high risk of being misleading to consumers. Such words and phrases include claims such as “financial freedom,” “full-time income,” “replacement income,” “residual income,” and “career-level income.” Stella & DOT chose not to provide earnings data to DSSRC to support the earnings representations communicated by its salesforce members and, instead, attempted to have the posts removed in their entirety.

DSSRC recognized that most of the posts identified were several years old, were disseminated by inactive salesforce members, and that Stella & DOT may not be able to require the former distributors to remove such claims. Nevertheless, as DSSRC has stated in several previous inquires, when a company is made aware of a problematic claim that was made by an inactive salesforce member it is expected that the direct selling company will make a good faith effort to contact that individual and request that the inaccurate post be disabled.[5]

With respect to the active salesforce members responsible for the claims at issue, the Company indicated to DSSRC that it has attempted to contact individuals to have the posts removed. DSSRC acknowledged that three of the five posts which were made by active Stella & DOT salesforce members were removed. However, DSSRC notes that two posts that were disseminated by active Company salesforce members remain publicly available (i.e., “What if I told you that Stella & Dot will …give you $1000 worth of free product…What if I told you that you could have as much free clothing and jewelry that you wanted ……this company has brought me financial freedom.” and “Your Stella & Dot business will give you financial freedom, flexibility”).

It is a long-held principle of advertising law that a Company must have substantiation for any reasonable interpretation of its advertising claims.[6] Accordingly, in the omission of any sales data indicating that Company salesforce members typically earn significant income from the Stella & DOT business opportunity, DSSRC recommended that the remaining posts at issue be removed. Moreover, if the Company is not successful in its attempts to have salesforce members remove the posts, DSSRC further recommends that the Company utilize the social media platform’s reporting mechanism for intellectual property violations and, if necessary, also contact the platform in writing and request removal of the remaining social media posts.

While DSSRC appreciated the actions taken by Stella & DOT to remove three of the twelve posts that were brought to its attention during this inquiry, it nevertheless remained concerned that claims stating that salesforce members could achieve “financial freedom” or earn significant income through the Stella & DOT business opportunity were not be supported by the Company, as Stella & DOT chose not to provide support for the earnings claim at issue and, instead, attempted to contact the salesforce members responsible for the remaining social media posts to have them removed.

DSSRC recommended that if the social media posts that remain publicly accessible were communicated by active Stella & DOT salesforce members, the Company should avail itself of the appropriate enforcement provisions in its Policy & Procedures to address the concerns at issue.

In addition, DSSRC recommended that the Company utilize the social media platform’s reporting mechanism for intellectual property violations and, if necessary, also contact the platform in writing and request removal of the remaining social media posts.

DSSRC will continue to monitor the status of those posts which remain publicly accessible and, if necessary, request that the Company provide further information regarding its efforts to have the posts removed.

“We have reached out to all owners of these posts and asked them to remove them. Almost all of the salesforce members are no longer active with the company and have not responded. We will continue to make every effort to remove all false claims by any past or current ambassador for all of Stella & DOT brands,”

[2] More specifically, Stella & DOT removed the claims stating: “It’s no secret that Stella & Dot has brought so many amazing blessings into my life – friendships, financial freedom, and more empowerment than I ever thought possible…#FinancialFreedom’”; “FINANCIAL FREEDOM = STELLA & DOT,” and “*freedom to work wherever & whenever I want; financial freedom for all of life’s ‘extras’; *opportunity to travel. What would you ‘why’ be? How could this sparkly side hustle change your life?”

[3] DSSRC Guidance for Earnings Claim in the Direct Selling Industry, Section 4 at https://bbbnp-bbbp-stf-use1-01.s3.amazonaws.com/docs/default-source/dssrc/dssrc_guidanceonearningsclaimsforthedirectsellingindustry_2020.pdf?sfvrsn=4ecfcd36_6.