PartyLite Worldwide, LLC (“PartyLite” or the “Company”) is a multi-level marketing company headquartered in Plymouth, MA and founded in 1973. The Company markets candles, home décor, and home fragrance products.

This inquiry included six earnings claims disseminated by Company salesforce members. The representative claims, several of which originated outside of the United States, formed the basis of this inquiry and were communicated on Facebook and LinkedIn. Those claims are set forth below. 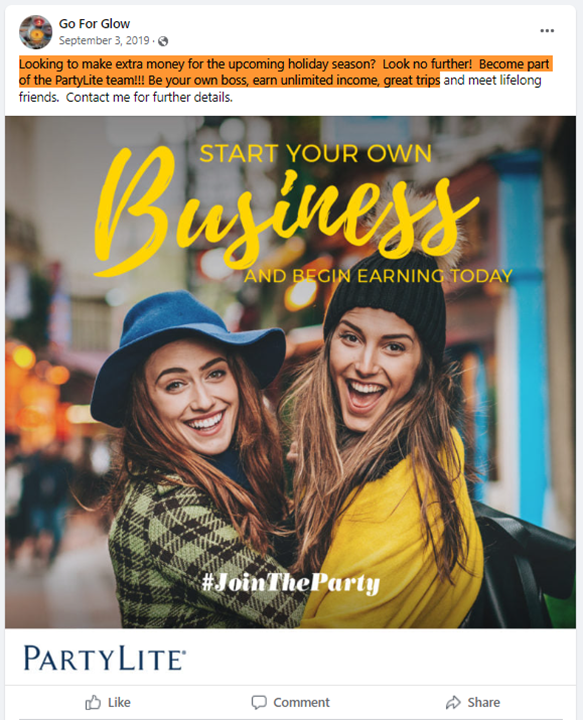 PartyLite did not attempt to substantiate the earnings claims at issue and, instead, took action to facilitate the removal of the social media posts. More specifically, three of the posts that were the subject of DSSRC’s inquiry were immediately removed by the Company after its receipt of DSSRC’s Notice of Inquiry, while six other posts remained active.

With respect to the three (3) remaining posts, the Company took the following actions:

DSSRC appreciated the good faith efforts taken by PartyLite to address its concerns. The Company was successful in removing three of the Facebook posts brought to its attention by DSSRC and adequately demonstrated that it was making an ongoing, bona fide effort to address DSSRC’s concerns with respect to the remaining posts. DSSRC determined that the Company’s actions were necessary and appropriate.

Regarding the Facebook post that remains publicly accessible, as DSSRC has noted in previous inquiries, if a non-compliant post was made by a salesforce member that later became inactive, DSSRC recommends that, promptly upon learning of such a claim, a direct selling company should make a bona fide good faith effort to contact the former salesforce member to request that the improper claim be removed. DSSRC also recommends that the Company take additional steps to remove such claims from the marketplace including utilizing the mechanism that websites and social media platforms may have for removal of trademark or copyright violations. If the subject claim by a former salesforce member occurs on a website or platform without a reporting mechanism, DSSRC recommends that the Company should also contact the website or platform in writing and request removal of the subject claim or post.2 DSSRC agreed that PartyLite demonstrated a good faith effort by the actions that it took to have the claims in the remaining Facebook post removed.

Although the Company maintained that the claim was compliant because it reflected the salesforce member’s actual experience, DSSRC determined that the claim as presented in its unqualified context was still inaccurate. Preliminary, DSSRC concluded that the salesforce member’s statement regarding the incentive trips was an earnings claim. As noted in section 2(F) of the DSSRC Guidance on Earnings Claims for the Direct Selling Industry, for purposes of a DSSRC inquiry, an earnings claim is any claim, express or implied, communicated by either the direct selling company itself or by its independent salesforce members that conveys that salesforce members may earn or have earned company-sponsored incentives, including those lifestyle purchases described in section 2(B), and vacations or other rewards.”

Moreover, the fact the claim was an accurate reflection of the salesforce member’s experience with the Company’s business opportunity did not alleviate DSSRC’s concern that the claim was not representative of results that would be received by the typical PartyLite salesforce member. More specifically, according to the FTC Guides on the Use of Endorsements and Testimonials in Advertising, “If the advertiser does not have substantiation that the endorser’s experience is representative of what consumers will generally achieve, the advertisement should clearly and conspicuously disclose the generally expected performance in the depicted circumstances, and the advertiser must possess and rely on adequate substantiation for that representation.”

Accordingly, DSSRC recommended that PartyLite continue its efforts to either have the claim removed or, alternatively, have the salesforce member’s LinkedIn post modified to clearly and conspicuously disclose the number or percentage of salesforce members who typically earn company incentive trips.

Lastly, although the Company adequately demonstrated that it attempted to contact PartyLite Canada to have the remaining claim (“You decide how much you want to earn. The Sky’s the Limit. A few hundred dollars can become a few HUNDRED THOUSAND dollars!”) removed, DSSRC remains uncertain why the Company could not effectuate removal or modification of the 2014 YouTube video. The Company did not dispute the inadequacy of the claim at issue and has requested that the platform remove the video, but it was unclear why the PartyLite’s Canadian subsidiary could not effectuate the removal of this video. DSSRC urges the Company to continue its efforts to work with the platform and continue its communication with PartyLite Canada to have the earnings claims in the video removed.

DSSRC recognized the good faith efforts of PartyLite to remove three of the Facebook posts at issue in this inquiry and for the actions taken to address the earnings claim in the one Facebook post that remains publicly available. DSSRC recommended that the Company continue its efforts to have the salesforce member responsible for the LinkedIn post address DSSRC’s concern by either modifying or discontinuing the post pertaining to the incentive trips earned by the salesforce member through its participation in the PartyLite business opportunity. Finally, DSSRC recommended that PartyLite continue to work with YouTube and PartyLite Canada to effectuate removal of the earnings claims communicated in the video.

“PartyLite Gifts, Inc. has quickly taken action, and will continue to take action, on any instances of concern raised by the DSSRC by reaching out to the salesforce members responsible for the unauthorized posts and when appropriate contacting the platform where the claim was disseminated to request removal of the post. The Company has already been successful in having three of the nine claims at issue removed from circulation and continues its efforts to have the remaining posts removed. PartyLite Gifts will provide DSSRC with a description of our efforts including copies of the correspondence that are sent to the salesforce members who disseminated the posts that were the subject of this inquiry.”