Sunrider Corporation d/b/a Sunrider International (“Sunrider” or the “Company”) is a multi-level marketing company headquartered in Torrence, CA and founded in 1982. The Company markets a number of products including herbal food and beverages, nutritional supplements, and skin care and personal care products.

This inquiry included five earnings claims and six product performance claims disseminated by Company salesforce members. The representative claims, all of which originated outside of the United States, formed the basis of this inquiry and were communicated on Facebook and YouTube. Those claims are set forth below. 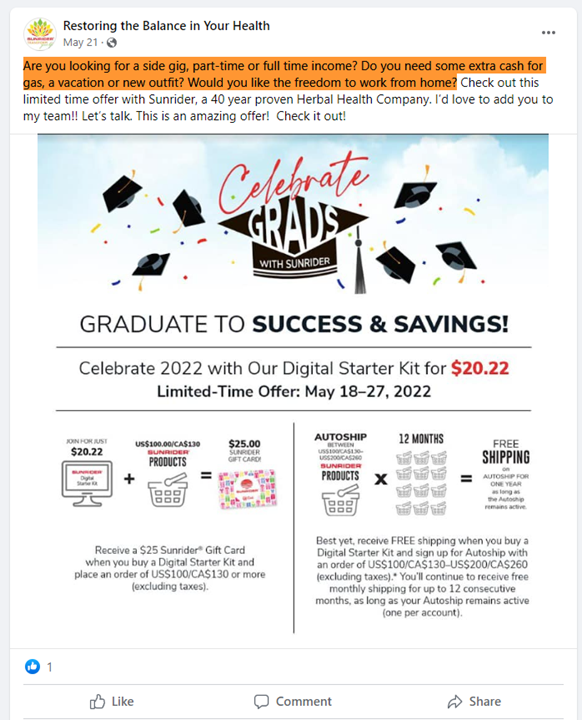 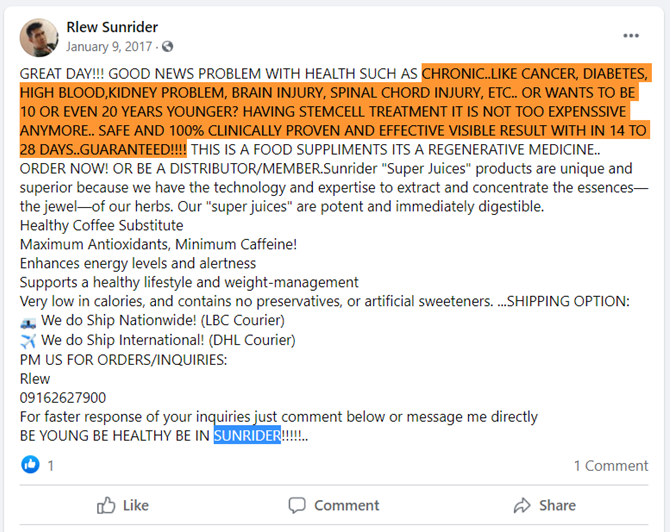 Sunrider did not attempt to substantiate the claims at issue and, instead, took action to facilitate the removal of the social media posts. More specifically, five of the posts that were the subject of DSSRC’s inquiry were immediately removed by the Company after its receipt of DSSRC’s Notice of Inquiry, while six other posts remained active.

As for the six (6) remaining posts, the Company removed five of the posts several weeks after the DSSRC inquiry was commenced. The remaining post was disseminated in 2017 by a salesforce member located in the Philippines and referenced the product’s ability to treat a number of serious health-related conditions including, but not limited to, cancer, diabetes, high blood pressure, arthritis, and kidney problems. The Company informed DSSRC that the account of the salesforce member responsible for that remaining post was terminated before the Company’s receipt of the DSSRC Notice of Inquiry.

The Company also advised DSSRC that it attempted to communicate with the inactive salesforce member responsible for the remaining post through the contacts that the Company still had on file and attempted to contact the individual through his Facebook page multiple times, but the inactive salesforce member remained unresponsive. Lastly, the Company indicated that it reported the content of the social media post to Facebook and was preparing to file a trademark infringement complaint with the social media platform.

DSSRC greatly appreciated Sunrider’s good faith efforts to address its concerns by successfully removing all but one of the social media posts at issue. DSSRC agreed that Sunrider’s efforts were necessary and appropriate.

As stated in DSSRC’s Guidance on Earnings Claims for the Direct Selling Industry, while DSSRC will evaluate any claim based upon the context in which the claim appears and the potential net impression of such claim to the audience, some words and phrases commonly used in earnings claims can carry a particularly high risk of being misleading to consumers. Such words and phrases include claims such as “financial freedom,” “full-time income,” “replacement income,” “residual income,” and “career-level income.” Furthermore, earnings claims must be substantiated and representative of a level of earnings that can be generally expected by the audience.1

Moreover, as DSSRC has noted in previous inquiries, health-related claims must be supported by reliable and competent scientific evidence. The Federal Trade Commission’s (“FTC”) standard of competent and reliable scientific evidence has been defined in FTC case law as "tests, analyses, research, studies, or other evidence based on the expertise of professionals in the relevant area, that has been conducted and evaluated in an objective manner by persons qualified to do so, using procedures generally accepted in the profession to yield accurate and reliable results.”2

When a direct selling company such as Sunrider is made aware of an improper product or income claim that was made by an individual that was an active salesforce member when the claim was made but is no longer affiliated with the company, DSSRC acknowledges that the direct selling company may not be able to locate the individual or require the former salesforce member to remove the claim. In that instance, DSSRC nonetheless recommends that the direct selling company make a bona fide, good faith effort to have the improper claim or post removed.3 Here, DSSRC concluded that Sunrider demonstrated that it made a bona fide effort to remove the remaining 2017 post that originated overseas and has contacted Facebook to facilitate the removal of the post.

Based upon these actions, DSSRC administratively closed its inquiry.

DSSRC administratively closed this inquiry based upon Sunrider removing all but one of the social media posts at issue and the bona fide, good faith action it has taken to remove the improper claims included in the remaining post.