This inquiry included six product performance claims and one earnings claim that were disseminated by Company salesforce members. The representative claims, several of which originated outside of the United States, formed the basis of this inquiry and were communicated on Facebook and LinkedIn.

Those claims are set forth below. 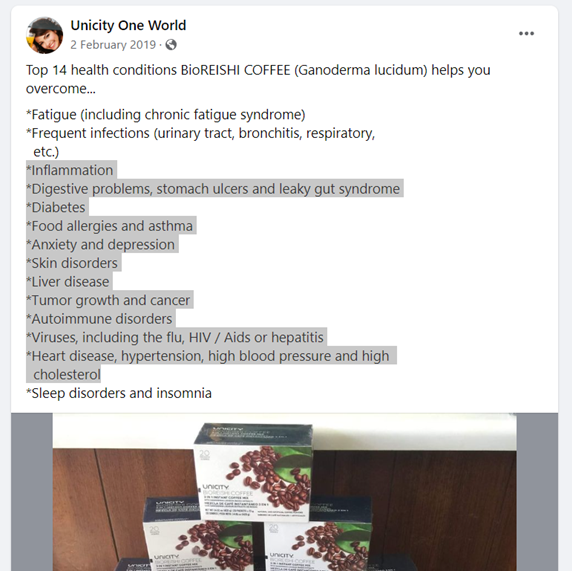 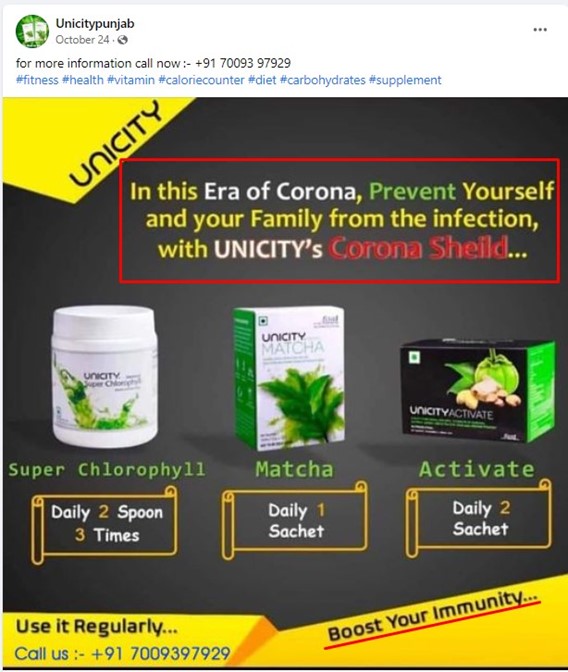 Unicity did not attempt to substantiate the claims at issue and, instead, worked diligently to effectuate the removal of the posts and to ensure that the salesforce members responsible for the posts understand the reason(s) that each is not acceptable to avoid future issues.

The Company noted that almost all of the posts were disseminated outside of the United States and that its efforts resulted in the removal of 18 of the 23 social media posts that were the subject of the inquiry.

With respect to the remaining posts, the Company explained that despite its best actions, it did not hear back from some salesforce members as well as those who are no longer affiliated with Unicity that other users could not be identified and that Facebook and YouTube would not remove the independently-created posts despite the Company’s requests.

Unicity advised DSSRC that to better monitor distributor communications and review company-produced materials, it recently added two new experienced full-time staffers to its Compliance Team, both of whom have worked reviewing promotional content of other direct sales companies.

Lastly, the Company informed DSSRC that it has suspended the accounts of the salesforce members that were unresponsive to the Company’s take-down requests.

DSSRC appreciated the good faith actions taken by Unicity to address its concerns. The Company was successful in removing almost 90% of the posts brought to its attention by DSSRC and adequately demonstrated that it made a bona fide effort to address DSSRC’s concerns with respect to the remaining posts. DSSRC determined that the Company’s actions were necessary and appropriate.

As DSSRC has noted in previous inquiries, health-related claims must be supported by reliable and competent evidence demonstrating that the product can perform as claimed. The Federal Trade Commission’s (“FTC”) standard of competent and reliable scientific evidence has been defined in FTC case law as "tests, analyses, research, studies, or other evidence based on the expertise of professionals in the relevant area, that has been conducted and evaluated in an objective manner by persons qualified to do so, using procedures generally accepted in the profession to yield accurate and reliable results."1

Three of the four individuals who were responsible for the remaining product performance claims live in Singapore and the other individual resides in India.2 After unsuccessfully attempting to contact the salesforce members, Unicity suspended all four of the accounts, an action that DSSRC agrees was warranted considering the egregiousness of the claims. The Company informed DSSRC that it requested user data from Facebook and reported the content of these posts to the social media platform for violating Unicity’s intellectual property rights.

DSSRC expressed its appreciation to the Company for being able to facilitate the removal of 18 of the 23 social media posts that communicated unsupported product performance claims.

The YouTube video which included the claims “How to Earn Extra Income With Unicity;” “That’s what Unicity is all about…an opportunity to make anything from extra money …make life-changing income…travel the world or be stay-at-home parent” was originally disseminated in 2015.3

As noted by DSSRC in section 6 of its Guidance for earnings Claims in the Direct Selling Industry, some words and phrases are prohibited when made to a general audience of prospective or current salesforce members. Such words and phrases include statements such as “quit your job,” “be set for life,” “make more money than you ever have imagined or thought possible,” “unlimited income,” “full-time income,” “replacement income,” “career-level income,” or any substantially similar statements or representations. Accordingly, DSSRC was concerned with references to “life changing income” and representations that the typical salesforce member could “travel the world” by virtue of its participation in the unicity business opportunity.

It was determined that the Company used its best (albeit, unsuccessful) efforts to address DSSRC’s concerns. Unicity informed DSSRC that salesforce members responsible for the video had their account terminated in 2019. Several members of the Company’s compliance team reported the video to YouTube for unauthorized content and although the video was disabled for a brief period of time, the platform has now made the video available to the public again.

DSSRC recognized that removing the social media posts that originated outside of the United States presents a significant challenge for the Company. As DSSRC has noted in previous self-regulatory inquiries, when a direct selling company is made aware of improper product (or income) claims that were made by an individual that was not within its geographical control or who was an active salesforce member when such claim was made but that has since become an inactive salesforce member of the company, DSSRC acknowledges that the direct selling company may not be able to require such salesforce members to remove a social media post. In that instance, DSSRC nonetheless recommends that the direct selling company make a bona fide good faith effort to have the improper claim removed.4

Here, it was determined that Unicity demonstrated that it made a bona fide, good faith effort to have the YouTube video removed.

DSSRC administratively closed the inquiry based upon Unicity’s good faith actions to remove 18 of the 23 social media posts at issue and made a good faith effort to have the remaining posts removed by attempting to contact the salesforce members responsible for the posts, suspending and/or terminating their accounts, and reporting the unauthorized content to Facebook and YouTube.